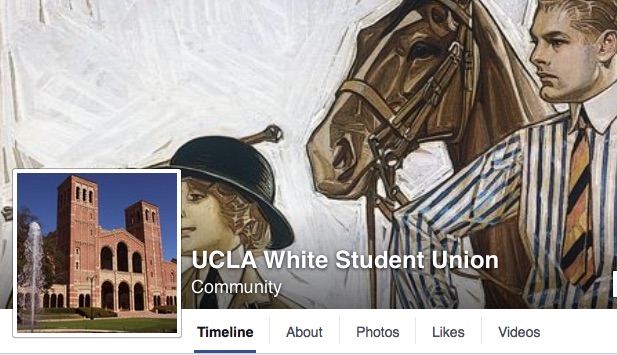 The Facebook group is one of more than 30 that has appeared on college campuses around the country. Other schools include UC Berkeley, Stanford University, Penn State, New York University, and the University of Missouri.

Although the groups occur only in social media form, it is unclear whether they were actually created by students of the institutions. In fact similarities in the descriptions of each group has led many to believe, including UCLA administration, that this is the work of outside forces “intending to disrupt our community.”

I wanted to alert you to the unfortunate recent appearance of a Facebook group called “UCLA White Student Union.”  We have been very concerned about it since it surfaced during the weekend and we are working to have the UCLA reference and logo removed from Facebook.

There is good reason to believe that this group is the work of people outside the UCLA community. In fact, nearly identical copies of groups also called “White Student Union” surfaced this past weekend at more than two dozen other institutions across the country with similar postings and language. There is also no registered student organization at UCLA with this name. The page appears to be designed to fuel conflict and provocation rather than to foster a serious and  constructive dialogue among students about issues of race.

While UCLA upholds the First Amendment rights of our students and the public, we reject efforts to generate conflict and satirize student activists who have raised serious issues about unequal learning environments and hostile campus climate at institutions across the nation. Because this page misrepresents itself as a UCLA group, we have been working with Facebook to have the page taken down.

These are disturbing and upsetting actions, in this instance, clearly from some groups or individuals intending to disrupt our community. Please, know that we want to  work against these hurtful actions and welcome your involvement. Thank you for your outreach, vigilance, and engagement.