Gabrielle Douglas’ ponytail along with some of the criticism she received
(Source: The Sarcasimist)

Despite all of her accomplishments, however, Douglas was heavily criticized about how her hairstyle looked during her competitions. Her slicked back ponytail was labeled unkempt, nappy, messy, and a plethora of other names and ultimately shifted everyone’s attention from talent to the quality of her ponytail.

According to USA Today, when questioned about her hair, Douglas responded by saying, “I just simply gelled it back, put some clips in it and put it in a bun. Are you kidding me? I just made history. And you’re focusing on my hair?” 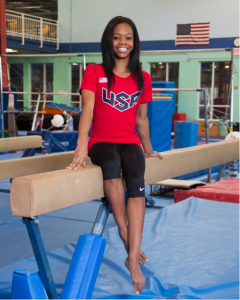 What do people expect an Afrikan American athlete, who does not have naturally straight hair, to look like while competing and sweating during the Olympics? Other athletes have had similar issues finding hairstyles that society consider presentable that are easy to manage.

Nina Barnes, a semi-pro tennis player, can definitely understand the struggle. In an interview with the Daily Beast she stated, “There aren’t many options for a black woman with their hair doing that kind of sport. And let’s be clear—even if she cut her hair off and went bald, black people wouldn’t be satisfied. They’d call her ugly and say she looks like a man. I think she looks fine and is doing what she needs to so she can win.‘’

Venus and Serena Williams are also among the list of athletes that have been criticized about their appearance multiple times, despite their inspirational athletic careers.