Sy Stokes has taken Youtube by storm. A third year Afrikan American Studies major, Sy has garnered over 200,000 views in just one week with his bold spoken word piece about the state of being black on UCLA’s campus. The black male experience is specifically highlighted in his powerful piece.

The five-minute video opens up with a harsh look at the reality of the black male student population. The numbers are written in bold on white paper and there’s no mistaking the message presented on it. It’s a hard wake-up call. Sure, we all knew the black population at UCLA wasn’t the highest, but I don’t think anybody thought that it was that low. We knew it was somewhere around three percent but to actually see the breakdown was another thing all together. In the video it is stated that the entering Freshman class of 2012 contained only forty-eight black males. Forty-eight black males. That’s it. There’s no sugar coating the absence of our presence with brochures. 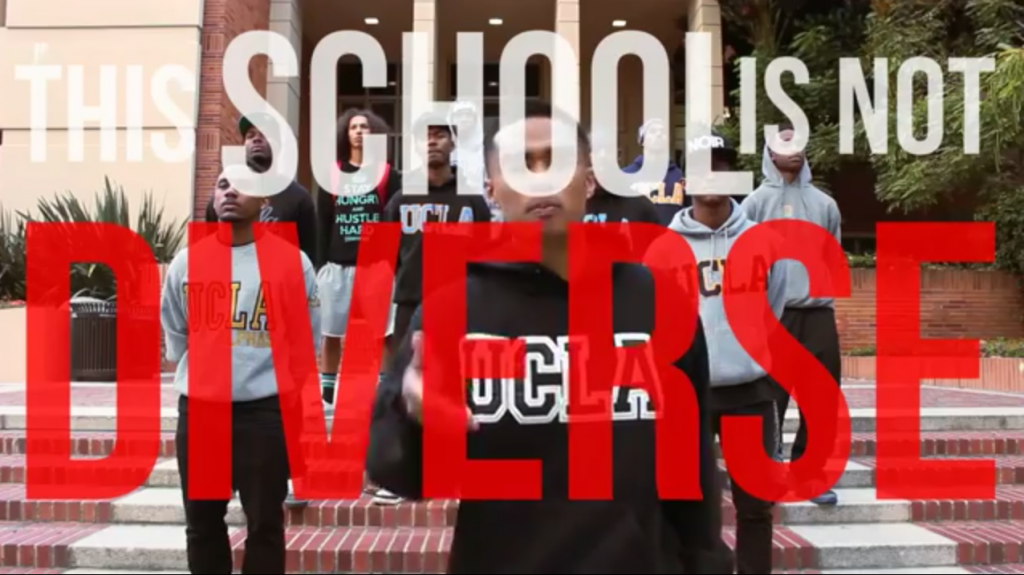 This is precisely what Sy Stokes is getting at. By putting the statistics under a magnifying glass, the veil is lifted off of UCLA’s half-attempt to make the campus appear diverse in it’s admission pamphlets. As Sy puts it,

“This school is not diverse just because you put it on a pamphlet. But you’ll name a building after Albert Carnesale who publicly opposes affirmative action. The action that can make our fraction on your demographic pie chart look more than just a second hand on a clock. It’s all…. talk.”

After several more examples of the state of black students on campus, including a reference to Rosa Parks, Sy ends his piece with a daunting rhetorical question, “How the hell am I supposed to be proud… to call myself… a Bruin?”

The question posed really forces students and faculty of all races to take a hard critical look at what is really going on at the university we call home.

But what is Sy’s goal in making this video? Besides the call of awareness, what is Sy Stokes asking of his viewers? Is it a plea for affirmative action? I talked with Sy to get his response. It turns out that what he hopes to accomplish with this video is to pass a Diversity Requirement. Sy states, “I’m working on an online petition right now to implement a diversity requirement at UCLA. Every other UC has a diversity requirement and we don’t. It’s kind of like a punch to the face to be at a prestigious university with this reputation, and they don’t even have a diversity requirement… So no one ever has to learn about anything outside of themselves. The diversity requirement requires students to take an ethnic studies course as a GE. However, this is only a small step in what my primary goals are. In order to start any change, we have to admit there is something TO change. If we want to achieve this goal of genuine diversity on campus, we have to make a conscious effort to build a healthy and diverse learning environment for all students.”

On what prompted him to make the video, he sights, “There were a lot of things, but the first thing that sparked it was when I joined BMI [Black Male Institute) last Spring. I was working with Dr. Howard [a black professor at UCLA] and we were going over the statistics, and when I read them I just couldn’t believe it. I knew the climate was bad but when you see it, it just blows your mind. Being from Richmond, California, it was a total culture shock. I never really felt comfortable at UCLA.”

The statistics that are found in the video can be found via UCLA AIM.

When asked about his position on Affirmative Action he says, “The reason why Affirmative Action is, for me, the only solution right now is because it’s on the table. It’s something that is available that can benefit us. Now obviously, there’s a huge argument going on about, ‘If you’re going to raise these percentages than you have to lower other percentages.’ However, people think that they’re just going to let every black person in. People are being way to extreme about it… If you look at the holistic process that’s going on now, it was because we were so underrepresented.  In 2006, there were only 96 entering black students and it was just ridiculous, so they implemented the holistic process. However, the holistic process was just a Band-Aid solution. If you look at the numbers, you can notice that there has barely been any improvement.”

“There are definitely flaws with Affirmative Action because you’re generalizing a whole population, but there’s a reason for that. There’s a strong correlation between race and socioeconomic status in this nation, and you would learn that if you took an ethnic-studies class. Even if you generalize, every student still needs to have the credentials to get in. But unfortunately, the minority population does not have the same opportunity, so they should not be compared in a blind admissions process.”

A popular argument among those that oppose Affirmative Action, especially in an institution that is so highly ranked, is that Afrikan-Americans simply don’t have the grades to get in. UCLA is a prestigious institution and shouldn’t “lower” their standards of admission. On this aspect Sy said, “That is honestly a selfish need to be honest. There are schools that can’t even afford to have AP courses, so how do you expect someone to have above a 4.0? It doesn’t make any sense.”

In the final line of spoken word piece, Sy asks, “How the hell am I supposed to be proud… to call myself… a Bruin?”

So is he a proud bruin?

Sy responded, “I used to be. When I first got here I was so excited and I bought everything that had to do with UCLA. I had a UCLA license plate, everything. I thought that the reputation was true, but now not so much. I mean obviously I’m proud to be at a higher learning institution, and I do appreciate that… But after being here for three years I see what a lie it is, and seeing how they put Afrikan-Americans on a sheet of paper to say, ‘We’re Diverse!’ and people don’t realize how fake that is. And then you look at the numbers and your like, ‘Oh… what happened?’ and you get here and you realize you have no place to be. For example, the first experience I ever had with a white frat, I didn’t even get through the door, but my five white friends did with no questions asked. That was one of my first experiences at UCLA. At first I just kind of brushed it off but after getting more invested into this community, I realized that there are no voices being heard. Athletes aren’t allowed to say anything political or else they get kicked off the team and they make up sixty five percent, so with that, you’re basically dismissing sixty-five percent of our population, so it’s like one of us has to do something.”

And do something he did. Black students and other students of color from all over have showed immense support. I’ve read comments from students from other UC schools as well as out of state schools such as Arizona State and Purdue University. Even somebody from Spellman contacted him. “I definitely didn’t think it would get this popular this fast, but I’m so happy it did. I posted it Monday [November 4th, 2013] night, and when I woke up it already had over six thousand views, and I had a million emails in my inbox. It was crazy. I got a lot of hate mail, but it’s good because at least it’s starting a conversation.”

At the beginning of the interview he joked that he wants one million views, but with such a powerful message and the steam propelling it forward, that joke may very well become a reality.