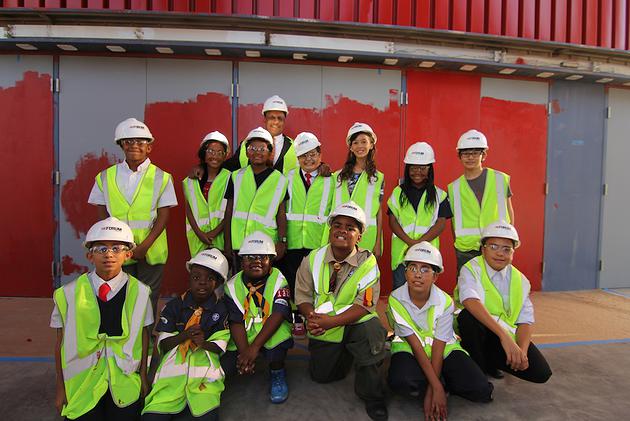 On November 8, Inglewood Mayor James T. Butts, along with dozens of local youth, added the final coat of red paint to the exterior of the Forum.  The change in the arena’s color, from blue to red, signifies not only new ownership, but also new beginnings.

“The Forum has been an icon in Southern California since it opened in 1967.  It is fitting that the next generation put the finishing touches on its renovation for the grand reopening in January 2014,” states Mayor Butts. The amphitheater, which was purchased by Madison Square Gardens in 2012, has undergone an extensive face-lift; the entertainment promotion company reportedly spent over $70 million revamping and modernizing the building.

The restoration is a welcome change for the iconic arena.  For the past fourteen years, it has stood virtually unused and ignored. During the 20th century, however, the indoor stadium was a prime venue for sporting events and concerts. It became a landmark soon after its construction; much of its recognition stemmed from being the home stadium of the famous Los Angeles Lakers. Notable events held at the Forum during the 70s and 80s included the Amnesty International’s A Conspiracy of Hope Benefit Concert, the 1984 Summer Olympics basketball tournaments, and performances by the Jackson 5.

In 1988, The Forum’s naming rights were sold to Great Western Savings and Loan; it was renamed the Great Western Forum, and the originally red building was painted blue.  The dome began to decline in popularity in the 1990s because it was widely deemed small and outdated. A new sports arena, the Staples Center, was constructed in downtown Los Angeles as a modern alternative, so the Los Angeles Lakers moved to the contemporary venue in 1999.

At the turn of the century, Faithful Central Bible Church bought the amphitheater as a site for its Sunday services.  Although the building was available to rent for performances, sporting events, and other occasions, the church was not able to turn a profit.

This is where the Madison Square Garden Company (MSG) came in. The corporation obtained the indoor stadium from the church last year with the intention of transforming it into a “world-class” concert location; the company has a reputation for producing top rated entertainment venues and is devoted to attaining comparable results for the Forum, which has been retitled, “The Forum presented by Chase.”  MSG president and chief executive officer Hank Ratner said, “We…look forward to creating a venue that not only enhances the entertainment landscape of Los Angeles and Southern California, but also serves as a catalyst for the revitalization of the area.”

UCLA student and Inglewood resident, Denise DiMeglio is excited for the revival of the Forum and believes that it will bring a new vitality to Inglewood.  “Rather than Downtown being the only place with hype due to the Staples Center and Nokia Theatre, the Forum is giving the Inglewood area a chance to also have more life… Also, the opening means many more job opportunities for people in our hood which is great news,” stated DiMeglio.

The Forum project has already created over one hundred jobs for citizens of the Southwestern Los Angeles area; city officials predict that the renovated arena will inject $1.4 billion into the Inglewood economy over the next thirty years.   Mayor James T. Butts hopes to create a new economic core in the city, and believes that this venture is but the first step of a larger makeover of the area.

“Inglewood has always had tremendous potential for growth and prosperity,” Butts exclaimed, “This is going to bring back that pop, that sizzle to the city.”