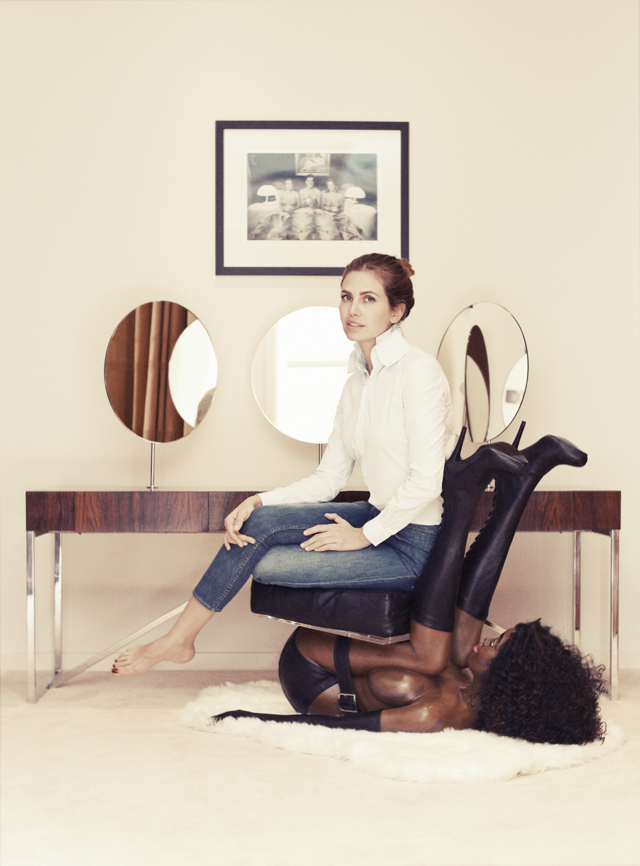 On January 20th, 2014, Martin Luther King Day, an online magazine entitled Garage, published a photo of its Editor-in-chief, Dasha Zhukova, sitting on a chair made to resemble a half-naked Black woman. Miroslava Duma, the blog’s editor, posted the insensitive photo on Instagram, and further marketed the image as something of trending, fashionable, and contemporary art.  In the image, the Moscow-born 32-year-old, wearing a pressed white button-up and crisp blue jeans, rests on a chair designed to portray a life-form Black mannequin that is naked, excusing a pair of leather black panties, a belt strapped around her lower body, elbow length gloves and skin-tight, and knee-high boots.

Dasha Zhukova responds to the criticism: “The chair pictured in the Buro 24/7 website interview is an artwork created by Norwegian artist Bjarne Melgaard, one of a series that reinterprets historical artworks from artist Allen Jones as a commentary on gender and racial politics. Its use in this photo shoot is regrettable as it took the artwork totally out of its intended context. I regret allowing an artwork with such charged meaning to be used in this context. I utterly abhor racism and would like to apologize to those offended by my participation in this shoot.”

Despite, her claim, the backlash of noted fashion journalists and the common public have displayed their disapproval of Zhukova’s work of art as a form of degradation.  Claire Sulmers, the editor of Fashion Bomb Daily, spoke of the unfortunate feature and calls the image an example of “White dominance and superiority, articulated in a seemingly serene yet overtly degrading way.”

“These issues and concerns highlight the conflicts found within the continued suppression of the Black female body in the fashion industry and its urge to be addressed. The art and fashion industries are the few bastions of society where blatant racism and ignorance are given the green light in the name of creativity,” Sulmers complained.

Claire Sulmers could be making a significant point. Although the chair is supposed to be portraying vision and creativity, it is offensive, tasteless, and one cannot help but to be investigative about the motives behind the editorial, and the reasoning behind its overall inspiration.

In response to the negative and insensitive imagery, how do we as a Black community continue to effectively address these issues that plague the fashion industry? Also, how do we highlight the issues circulating the recurrent theme of the Black body being dissected, misappropriated, and exploited in the media? What do you think of Garage Magazine’s fashion editorial? Can it be perceived as a work of art or as flat-out, blatant racism? Tell us what you think in the comment section below.