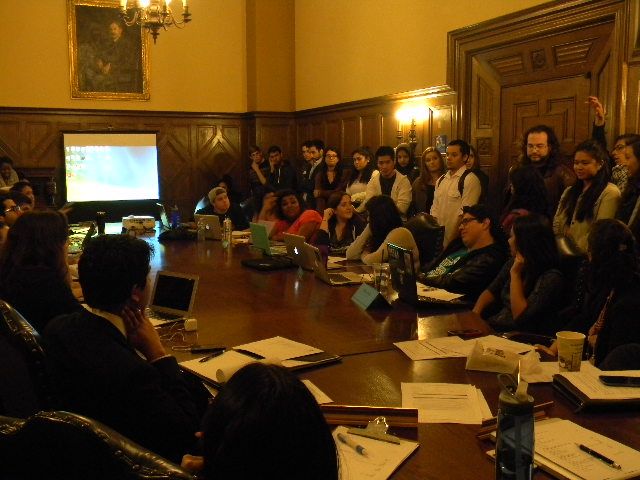 On Tuesday, February 4, the Afrikan Student Union at UCLA brought forth a resolution to the Undergraduate Students Association Council’s (USAC) weekly meeting.  The goal of the resolution is to “divest undergraduate students association and UC Los Angeles’ from corporations profiting from the Prison Industrial Complex.” For those who are not familiar with the resolution and its implications, it sets out to address and to act as part of the solution towards many of the issues that Black and other minority students face both on and off campus, in relation to the “Private Prison Industry.” According to the resolution, corporations that have ties to the use of inmate labor include, Wells Fargo, Vanguard Group, Blackrock Fund Advisors, Bank of America, Morgan Stanley, Invesco Finance LTD, JP Morgan Chase, and Procter & Gamble.

The meeting began with a public comment from Kateisha Menefield, Vice-Chair of the Afrikan Student Union, who introduced the resolution that demands UCLA to take “Responsibility not just as Bruins, but as simple human beings.” 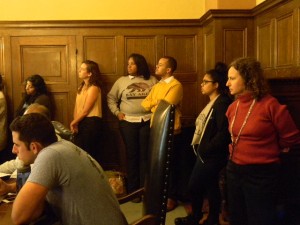 Following Menefield’s lead, other students presented their own comments.  Devin Murphy, President of the Black Pre-Law Association said, “The [Private Prison Industry] is utilizing human beings in prisons to make more money,” and with a push from our government for more funding, “our tax dollars and student fees are going into this funding.” Murphy furthered expressed personal experience as a Black male on campus, “There is a surplus of African American men in prison, why is it not a surplus of African American men on this campus? That is an issue. When we talk about the idea of campus climate and feeling included, how do I feel included when more of me are in prison than on this campus, am I suppose to be here? That’s the question I ask myself.”

Black Bruins were not the only students present to support this issue, as other ethnic groups voiced their concerns:

“I do not want people to fall into the trap that Black History is [only] Rosa Parks and Harriett Tubman… because the Jim Crow Laws still lives on in [the form of] mass incarceration, and we have to recognize that history repeats and is disguised in different forms… [We] should use this legacy of Black History month to educate ourselves and to make an actual change” – UCLA student of Palestine

“More Black men are under correctional control today than were enslaved in 1850, and… Black women are the fastest growing segment of the juvenile justice population and the criminal justice system.”

The Black inmate percentage is almost half of the incarcerated population, totaling nearly 40 percent, which correlates with the school-to-prison pipeline phenomenon. The resolution further states that in the Los Angeles Unified School District in the years 2012-2013,  “Latino students were more than twice as likely as White students to be ticketed, [and] Black students were almost six times as likely as a White student to be ticketed.”

Males make up 70 percent of these statistics.

Despite the issues and statistics presented, the resolution and public comments were marked with criticism. The use of what is considered to be “divisive language,” was the least of the students worries who contributed to the public comment portion of the meeting. However, after Moore’s and Hall’s presentation, there were small grammatical errors being critiqued by some of the council members. While in an article published that same day before the meeting took place, Natalie Delgadillo of the Daily Bruin also focused on critiquing the rhetoric of a presentation from the resolution, and how public opinion could weaken the goal of passing it. 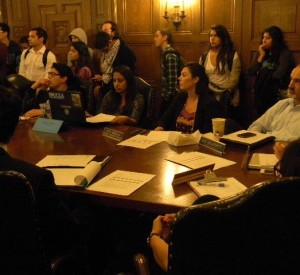 Delgadillo said, “Sometimes the oldest, most overused clichés ring the truest.  A resolution set to be presented at the student government meeting tonight has an old grammar school adage looping in my head:  ‘It’s not what you say, it’s how you say it’.  She concluded that in deciding whether or not to pass a resolution, “Councilmembers must always consider [if] a resolution is the best way to address an issue they find worthwhile – and if that answer is yes, its authors must work to make sure the resolution’s purpose isn’t marred by pointlessly divisive or extreme language.”

Criticism seemed to deviate from the issue being presented, and only ten council members approved the resolution while the rest neither abstained nor denied it. Despite criticism, many of the council members expressed support, and for some, the personal experiences of the students resonated.

In spite of this, the personal experiences of students are still viewed by some as “pointlessly divisive or extreme language.”  It is clear that there is still work to be done, not only for the Black community, but also for all students on and off campus.