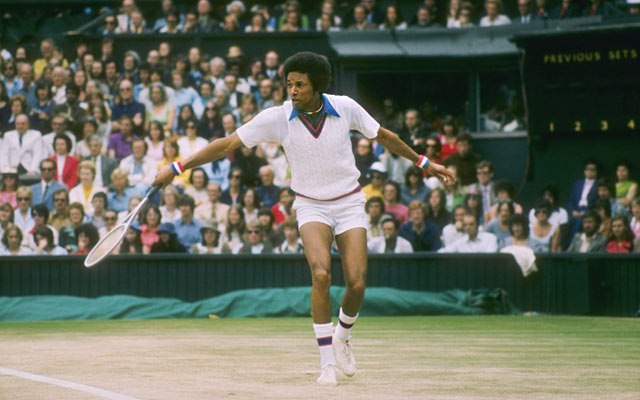 Sweat beads rolled down his forehead. But it didn’t matter. Nothing mattered but this moment now. This was his moment. Arthur squeezed his tennis racquet and then loosened his grip effectively. He had practiced every day, pushing his body to its physical limits, for longer than he could remember. But this was different. This time it was mind management. It was control. It would spell for him unbelievable victory or spiraling defeat. But defeat wasn’t an option for Arthur Ashe, the first Black tennis player ever selected for the United States Davis Cup Team in 1963.

The veins in Ashe’s hands pulsed in evanescent strides. In his mind he was ready for this. More ready to accept his fate than he could have possibly imagined. His opponent was none other than Bob Lutz, his former teammate in the United States Davis Cup team. It was 1968 and this match was the first US Open of the open era. The winner would make sports history.

Bob eyed Arthur with all the passion and might he summoned for this match. Arthur remained steady. The match began and in a flash, the two were fighting for the win, running across the tennis court, each fighting for history to turn in their favor.

But Arthur knew something that Bob didn’t. He knew of the power of mind management. He knew that both their skills and training were evenly matched. But what Bob didn’t have was the proper awareness of his mental training, the same awareness that eased Arthur’s pulsing veins and allowed him to focus entirely on the match, and the match alone. Meanwhile, Bob was having difficulty not with the play, but with himself– his own stress deteriorating his muscles and ability to focus. Yet, that is what makes the superior athlete—the offensive ability to control oneself no matter the situation and no matter the stakes!

Arthur Ashe won that day. He went on to become an American World No.1 professional tennis player, winning a total of three Grand Slam titles, and becoming the only Black man in history to ever win the single titles at Wimbledon, the US Open, and the Australian Open.

He passed away on February 6th, 1993 due to contracting HIV from a blood transfusion he received during heart bypass surgery. But his legacy lives on today. Arthur Ashe, who was born in 1943, was posthumously awarded the Presidential Medal for Freedom, and was inducted in the Virginia Sports Hall of Fame as well as the International Tennis Hall of Fame and the Intercollegiate Tennis Association Hall of Fame. Today, his name graces the Student Health and Wellness Center at UCLA.

Arthur Ashe is the legend that left a legacy beyond the game of tennis that made him great. He left a lasting mark on history for generation to strive for, for victors of the present to look pack upon. He has been the ultimate inspiration for countless individuals as one who would not let the politics of his time dictate the course of his great life.