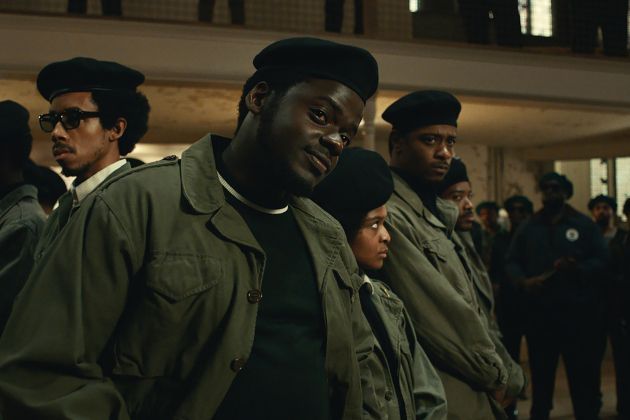 NOMMO was honored to be invited to a JUDAS AND THE BLACK MESSIAH (JATBM) Summit preceding the film’s highly anticipated release on February 12th.  This early access summit was awe-inspiring to young creatives, activists, and revolutionaries. As the cast of the film discussed legacy, art, pop culture, women of the movement, and the story of betrayal with the family of Chairman Fred Hampton and industry professionals, the theme of internal revolution became a clear take away from the film’s purpose.

In conversation with Baratunde Thurston and Chairman Fred Hampton Jr., Daniel Kaluuya, who plays Chairman Fred Hampton, suggests that Hampton had mastered an internal revolution: that is, Hampton was free within the mind, spirit, and soul, and could therefore give people the tools to free themselves. Throughout the summit, this concept of internal revolution stuck with me. The tools to revolution lie within the self, and as individuals realize the power of community, empathy, and compassion, we can move forward with our collective efforts at freedom.

Director Shaka King notes that the parallels between JATBM and the troubles of community organizing aren’t intentional, but so informative to how the United States has been committed to silencing voices of dissent and weaponizing the state. Community organizers, described by King as “the people who did the work,” made up the Illinois Chapter of the Black Panther Party, and Chairman Fred Hampton was a leading character in unifying non-politicized street groups to increase efforts at healing the city. Chairman Fred Hampton Jr. continues his father’s legacy in the streets of Illinois, heading the Illinois Chapter of the Black Panther Party Cubs. He says, “The streets are our office. The same streets Chairman Fred Hampton organized in,” illuminating the dedication community members have to the fight for liberation. During filming, Chairman Fred Hampton Jr. and his mother, Mother Akua, showed the cast and crew around the streets of Chicago, which the Chairman describes as a warzone and microcosm for the freedom fight. He says, “Working in the streets of Chiraq (Chicago) is what the underbelly of a revolutionary is. This that sh*t you can’t read in books. This that sh*t you gotta smell, feel.”

The internal revolution inherently lends itself to a life dedicated to community. When filming in Chicago, Kaluuya says that his intention was connection. He says, “I’m here to connect. I don’t wanna look at you. I wanna look with you.” As we look closer at JATBM, there is no doubt about the connectedness and togetherness presented in a film about betrayal. The film does an amazing job at capturing the contradictions between the FBI’s presentation of the Black Panther Party as a terrorist organization and Chairman Fred Hampton’s efforts at unifying and healing the city. As JATBM “heightens the contradictions” on screen, we see parallels to mutual aid efforts of this past summer and countless other liberation movements. Global activist Linda Sarsour tells it how it is. She says, “You can’t organize hungry people,” and on the flip side of the coin, “We have to be intentional about educating ourselves,” says Pastor Marshall Hatch Jr. of the MAAFA Redemption Project. The combination of caring for our people and educating our people are just small steps to intentional transformation through internal revolution.

As young people take steps to revolutionize, Mother Akua tells about the sacrifice true revolutionaries make for the cause. “We are still not free. Everybody saying, “I’m a revolutionary,” you don’t even know what a revolutionary is!” says the writer, activist, and former member of the Illinois Black Panther Party. In conversation with Dominique Fishback, who plays young Deborah Johnson in the film, Akua and Fishback note that not everyone can be a revolutionary, and they don’t have to. Ebonee Davis, model, activist and panelist on popular culture in JATBM says, “(Today), Rest is an act of rebellion.” When Black people take time to love themselves, the internal revolution begins.

Fishback confesses that she was unfamiliar with Hampton’s story before taking the role, but the sense of community, family, and creativity presented on set felt more influential than years of schooling. Earlier in the summit, Kaluuya explained that classes do not teach the empathy and compassion that is most influential in activist work, but opening your heart and having hard conversations does.

JATBM opens us up to an alternate representation of Black characters, centering the film on William O’ Neil, the FBI informant responsible for Chairman Fred Hampton’s assassination by the FBI during a no-knock warrant. LaKeith Stanfield, who plays O’Neil in the film, has a knack for bringing complex characters to life: his nuanced facial expressions and voice capture the internal struggle, existentialism, and isolation of a character like “the rat.” Stanfield says, “It means a lot for us as Black Americans to be represented on film in the ways we want. Now, we have to give ourselves a chance to tell stories and see perspectives. We can’t exist in a canon of how we do things.” To see ourselves as the betrayer, the rat, the bitch, provides a sense of self-reflection: a lot of people do not see themselves in Hampton because he has conquered the internal revolution. The characters that have not often resonate with us the most.

JUDAS AND THE BLACK MESSIAH truly captures the story of betrayal and contradiction that lies under the assassination of Chairman Fred Hampton. Unintentionally, however, it captures the story of community, compassion, vulnerability, and internal revolution as the film unfolds. It serves as a reminder to young activists and potential revolutionaries the dangers of the work and the sacrifices made for liberation, and Hampton’s work with the Black Panther Party continues to inspire millions of mutual aid efforts around the world.

Sending immense gratitude to the student ambassadors at Warner Bros. Pictures and the amazing cast and crew for sharing their stories! Thank you so much for the opportunity to cover such an important event.