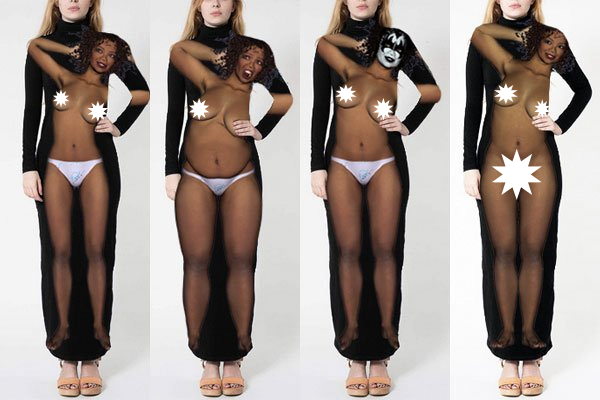 Most recently, there has been quite a stir about the particular fashionable taste of fashion designer Peggy Noland. One of her graphic dresses displays a life-size image of what appears to be an unknown, and unclothed, Afrikan American female with a photo-shopped image of Oprah’s face in exchange.  There are multiple images of women and even one with an image of a KISS member photos-shopped as the head of the body.

Looks familiar doesn’t it? I’m sure UCLA students are quite familiar with similar occurrences happening against the Dr. Christian Head versus UC Regents, where Professor Head was mocked in a class presentation and his head cropped onto an image of a kneeling gorilla. Only this time, they done went and tried to play Oprah! Stirring questions about the dress itself have assessed many critical debates and disagreements.

In fact, in XOjane.com, Black writer Veronica Miller expressed her outrage with the dress and shared her disapproval. Miller writes:

“‘Progressive’ White women, you need to quit. This thing that you keep doing, exploring your own issues with repressed sexuality and body image through the use of Black women who didn’t give you permission to be self-image surrogates? [It] needs to stop, and it needs to come to an end now. Not now, but RIGHT now. We are not playgrounds where you get to explore your issues. You don’t get to use our bodies as the shield behind which you throw up your middle finger up at patriarchy. These stunts make you no better than patriarchs, no better than misogynists. You take our bodies apart and display them in pieces the same exact way you admonish advertising, fashion and music for doing. That is hypocritical behavior and hypocritical behavior is tired.” 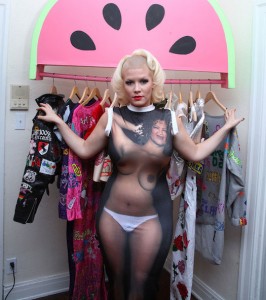 Miller’s disapproval cannot be dismissed as illogical. In fact, it is quite common for members of the Afrikan American community to share experiences dealing with being ostracized or feeling singled out for their physical features. Fashionbombdaily.com stated, “Black women have dealt with the misappropriation and exploitation of their bodies by others since Saartjie Baartman first stepped onto European soil in the 19th century. It’s 2013—you’d hope people would know better by now. Sadly, they don’t.”

And just when you thought it couldn’t get worst.

Lena Adelsohn Liljeroth, Sweden’s Minister of Culture and Sports, was video-recorded laughing and smiling as she posed with other coworkers in front of the cake of an Afrikan woman. (See it for yourself: www.youtube.com/watch?v=etAYFadObVY)

Now this was not just any ordinary cake. In fact, Black artist Makode Aj Linde who designed the cake described the pastry dessert as a ‘genital mutilation cake.’ Linde designed the cake to make screaming, painful noises as it was being sliced into.  As people sliced into the “woman’s vagina”, the depiction behind it suggest she was being “mutilated.”

In the video, the people who are indulging in the cake are seen standing around laughing in enjoyment and making a mockery of the Black bodied cake.

Is there a thin line between what is appropriately considered creative and ill bred? How much more do Black women have to overcome in order to be viewed as whole beings and not as human spectacles? How far is too far and where can we as a community begin to send waves and break barriers in order to correct these problematic issues found in the Afrikan-American community?