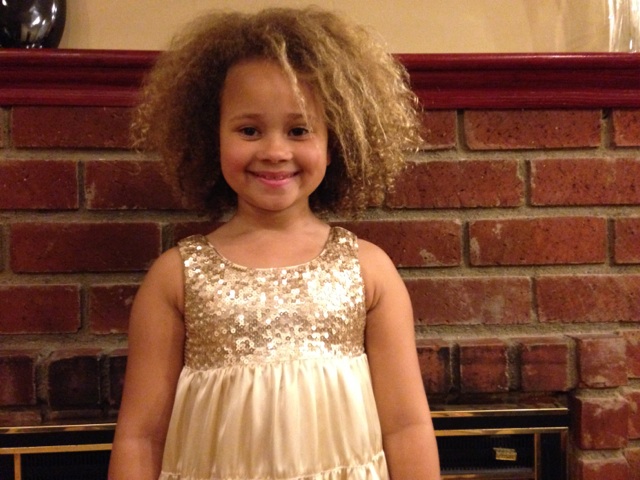 Hours before the Superbowl, I got the chance to sit down with the Colbert family and hear their thoughts concerning the racial controversy that surrounded, and perhaps even eclipsed, their six-year-old daughter’s first acting job in a Cheerios commercial as the child of a bi-racial couple. With a sequel commercial aired during the Superbowl, the issue of interracial couples is back on the table; and this time with all of America watching. 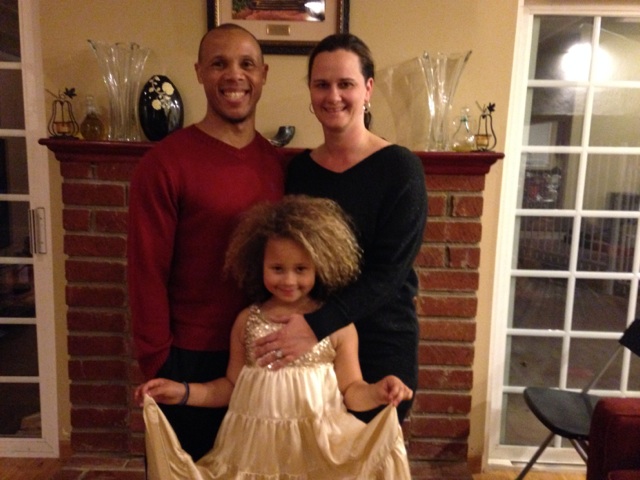 What was your initial reaction to the backlash that came from the first video?

Janet: I was a little bit surprised that people were making an issue of this especially out here in California. I mean I know that the comments could have come from all over the world… but [because it was] vocalized, [it] was shocking. I can see someone internalizing and thinking, “Uggh, that disgust me” because of their internalized thinking or whatever. But to actually say the things that were said; I was just shocked. I was just like…really?

Chris: Me, on the other hand, as I said before, I was excited, because it gets the issue out. It allows us to have a discussion about [interracial relationships and biracial children].

If you think about it, America, we’re still very much divided and segregated.

Many of the racist comments expressed anger and even disgust at the sight of a mixed raced family. Is this what you encounter in daily life as an interracial couple?

Janet: No. As far as my social settings and my immediate family and friends, no.

So what does that tell you, when on the day to day you don’t get this negativity, but then the commercial received this kind of response?

Janet: That our minds have progressed, but everyone’s hasn’t.

Chris:  You see, you have a local type of setting, and then you have a larger typesetting. Those people [who are responding negatively], they’re fine [with interracial marriage] as long as it’s local. But when you try to make this a national thing they’re like, naw, we’re not okay with this.

So do you think that a part of the backlash comes from the promotion of interracial couples?

I was actually excited about the fact that they were using parents that were actually representative of the child. Because a lot of time, with biracial children, they either go with a Black family or a White family.  So the fact that they actually [represented] where she comes from… I thought it was nice to have that representation, verses trying to make her look like she belongs to one or the other.

Given all the interracial marriages in the United States, why do you think there is still a marketing tubule with interracial couples? What does that say about America given that we have a Black president?

Chris: Look, let’s just face it; it’s always going to be here. That divide that has always been here from the beginning, it’s always going to be there. My take on is this… we won’t be stopped. What I mean by that is, people are going to love who they’re going to love. People are going to fall in love with who they’re going to fall in love with… which is what the commercial was trying to show… having this family shows that hey, there are two different groups of people who from two different background, who  happen to love each other, they came together and had this mixed child and so.… Have some cheerios. (He chuckled)

More people liked the video than disliked it, right?

Do you think this represents American perspective on interracial dating?

Who do you think the opposition was coming from? Do you have any ideas about rather the Whites or the Blacks are the aggressors as far as the negative comments are concerned?

Janet: Again, we have to remember with the diversity in the United States, there are not just two races. So it’s not just either this side, or these people. Because a lot of people were saying, “You know, women thought this and men thought that.” I don’t buy into any of that stereotyping at all.

What do you mean?

Janet: …Because the comments were saying perhaps they [the racist remarks] were coming from White men, who didn’t want to see a White women with a Black man; or Black women who didn’t want to see their Black man with a White women… you know what I mean? And I just don’t believe there was any stereotype with where the comments were coming for except from people that just really don’t have anything better to do than to try to be critical… and are uneducated and just kind of unaware of where we are today.

That’s not to say that people don’t have their own opinion. Everyone entitled to their own opinion, and there is free speech.  So they are welcome to say what they want to say but that doesn’t mean because that person who made the comment happens to be a White woman that all White women feel this way.

So I just want to get this straight; you saying that this isn’t coming from any one side; this is America as a whole, all races and genders, having a problem with this ad?

Chris: Yea, this problem is happening with Asian Americans who gets married and has children with a Black man. Or if there is a Native American Indian woman that married a Caucasian man…  it all mixes.

Janet: And it’s always important to remember that the negativity was a very small percentage. So I don’t think that this is a representation of where America is today.

So, do you think too much was made out of the racism? Was the negativity blown out of proportion?

Chris: Well, we can’t really answer that because it (the comments) got shut down pretty quick.

How is Zoey taking it all?

Janet:  She had no idea. It wasn’t until probably later on this school year… I’m thinking of that little Meme that said, “With all the problems in the world, are you really upset that my parents don’t match?” that’s kind of what she [Zoey] asked me. She said, “All this is because daddy is Black and you’re White?”  And I said, “Yea, a lot of it was.” And her face was like, “That doesn’t even make sense”.

All she’s ever been exposed to is parents that are together, that are raising her as a family, and that her brothers look just like her… so for her, it didn’t make any kind of sense.  The things that make sense to kids are: am I being fed? Am I being cared for? Am I being nurtured? You know what I mean?  They might not describe it in those terms… but kids just want to be loved, and they don’t care what their parents look like.

Chris: I am glad you asked that question.  On applications, school applications, or whatever, they ask what gender the kids is, and we answer accordingly. And then they ask, what ethnicity is the child. And they have both a primary and a secondary; and this is the way we fill it out:

In the primary area, we go Caucasian, and we go Black. And the secondary area…we put nothing!

We (gesturing to his wife) are one. The African American and the Caucasian came together and made one mix. So there is no secondary. There is no primary.

So if someone asked, ‘What is your daughter?’ You would say…?

How did you feel when you knew they wanted to do the commercial again?

Chris: We just felt very honored that they wanted to bring back the family.  We thought it was really cool. I wasn’t happy that “Yay we’re gonna do the interracial message.” I was just happy it was the super bowl you know. Our daughter is an actress, what she genuinely wants to do is act… and she happens to be from a multiracial background

And, believe it or not, it’s still hard for biracial children to get jobs because they are not exactly what the producers are looking for. So the fact that they used her again, on top of it being the super bowl, I’m still speechless.

On the first video there was an ambush of racial comments. This time around there doesn’t seem to be much backlash. What do you make of this?

Janet: He doesn’t pay as much attention to this stuff as I do– I mean I read every single comment and I have been very very blessed by what I’ve read. And the feed back I’ve seen has been positive.

So where did all the racists people go?

Janet: Well, don’t get me wrong; there has been a few negative comments on the new YouTube spot. I read one today that said, “Oops, they did it again, now I want to puke” or something like that. So they’re still there, there just not as vocal this time around.

What do you guys hope will come from this sequel?

Chris: We pray for more opportunities, because this is something she loves and like doing—this is her dream.

We hope that this will open more doors for her and, hopefully, help bring America together.

You can watch the Cheerio commercial here: http://www.youtube.com/watch?v=LKuQrKeGe6g