This last Thursday, I was given the opportunity to attend an info session with up-and-coming director Justin Simien and the talented producer/writer Lena Waithe at the Ralph J. Bunche Library. I was fairly excited to meet the masterminds behind the highly anticipated film, “Dear White People,” to hear them speak about their motivations for creating the project, and what sort of messages they are trying to promote through their respective works.

Before they spoke, the audience was shown the initial concept trailer for “Dear White People.” This was the trailer that went viral last year, and allowed for Simien and company to raise $40,000 to fund the film through crowd-sourced donations. Next we were shown pilot clips from Lena Waithe’s original series, “Twenties”. The series follows the lives of three twenty-something-year-old African-American women attempting to traverse the real world after college. These clips were made possible through Queen Latifah’s production company, Flavor Unit, who offered to fund the pilots after being captivated by the script. Drawing influence from Lena Dunham’s HBO series “Girls,” Waithe hopes to tell “The honest Black hipster coming of age story,” which is story that has yet to be properly told on film or TV.

Both “Twenties” and “Dear White People” are important in that they attempt to give viewers an authentic and honest portrayal of contemporary African American youth, with diverse characters who do not all fit into the traditional mold of “blackness”. 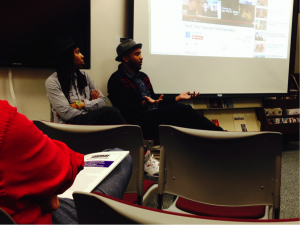 Waithe and Simien expressed the need for them to have some characters that portrayed their own experiences of being Black, in a predominately White middle class neighborhood, and how this influenced their upbringing. Both projects also address issues surrounding interracial relationships, homosexuality, and cultural appropriation in a way that manages to be witty, informing, and relatable for a millennial of all racial backgrounds.

But even so, Simian and Waithe still faced major difficulties getting their projects picked up by any major networks or studios, due to the belief that they would be unable of drawing in an audience. This is what motivated them to promote their projects themselves by releasing trailers and test pilots through the web, and the response has been overwhelmingly positive and supportive.

“Dear White People,” has premiered at Sundance Festival and managed to earn the Festival’s Special Jury Prize for Breakthrough Talent, and is slated for a major release later this year. While “Twenties,” creator Waithe has been in talks with a number of networks, particularly BET, about getting picked up.