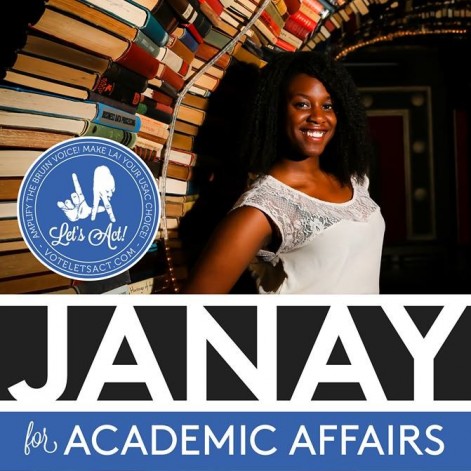 Meet Janay Williams, a third-year Microbiology Immunology Molecular Genetics major and African American Studies minor. Williams is a candidate for Academic Affairs Commissioner in the 2014 Undergraduate Students Association Council (USAC) elections. She is one of four African American candidates running under the Lets Act Party. Born and raised in Moreno Valley, Williams grew up in a large family as the youngest of three children. She attributes much of her success to her family.

As Janay heads into her fourth year at UCLA, she is hoping to hold a USAC position and to leave a strong legacy. Janay said, “This is an office I truly believe in, and I have been in the [Academic Affairs Commission] office for the past two years. I have seen the potential this office has, it can be very progressive since there is much power in it.”

In her final remarks about running for Academic Affairs Commissioner, Janay said, “I would ultimately be working for you all, and we would have the opportunity to help benefit the Black community, whatever you need from us as Black students we are here to give it to you. USAC [has been] a tool to facilitate in the organizing of the Afrikan Student Union… and will continue to.