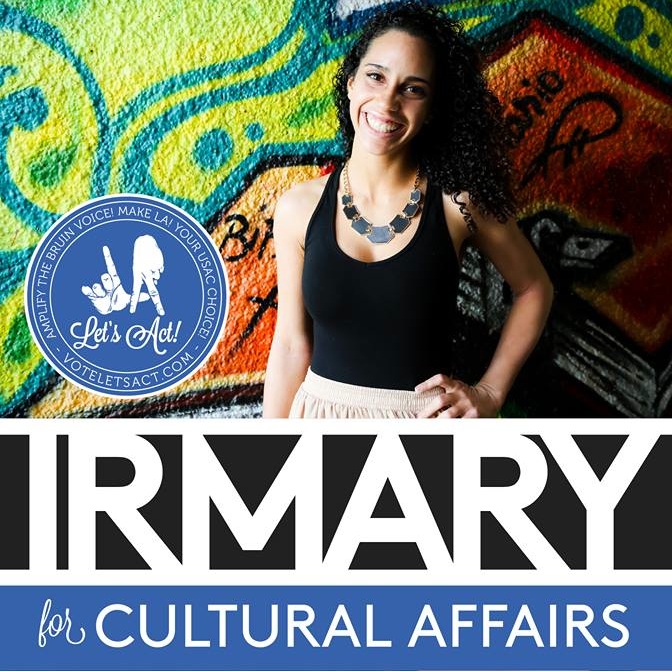 This afternoon, I had the opportunity to sit down with Irmary Garcia, the incoming Undergraduate Students Association Council (USAC) Cultural Affairs Commissioner. She proved to be very knowledgeable, not only of student government, but also of the innumerable difficulties that Afrikan-American students face at UCLA.  She was eager to divulge what she has planned for her new position.

Tell me about yourself.

Irmary: I am a third-year Political Science major from the Bay Area. I enjoy writing spoken word poetry, and my favorite musician would have to be Chance the Rapper. I feel that I can identify with him because he is young and Black; furthermore, despite not being signed to a record label, he is still successful.

What brought you to UCLA?

Irmary: The People of Color tour was what really won me over. Discovering that Dr. Martin Luther King, Jr. spoke at the Janss Steps was empowering. There is so much history here— I wanted to be a part of the legacy.

Once a Bruin, how did you become involved in student government?

Irmary: I feel like I would not be currently involved in USAC if it was not for the Afrikan Student Union (ASU). My freshman year, I participated in the Academic Supports Program (ASP) internship course. It really opened my eyes to the vast opportunities UCLA provides and showed me how I could get involved. I became involved in student government because I believe that it is important for me and others to bridge the gap between ASU and USAC. Many people view USAC as something that is not really accessible to them. I wish to change that.

Why did you choose to run for Cultural Affairs Commissioner?

Irmary: The arts are very important to me. I believe that they allow people to not only better understand their own identities but also one another.

How will your election benefit the Black community?

Irmary: As an Afrikan American, I have grown to understand what Umoja [the Swahili word for unity] means, and I recognize the numerous obstacles Black students face on this campus. Equipped with such knowledge, I know I will able to work with and for us. I want to make sure I am always available to our community.

Congratulations on being next year’s Commissioner! What are your plans for the office?

Irmary: Thank you, I am extremely excited! One thing that I intend to implement is a Cultural Crisis Response Team. Every year that I have been at UCLA, a hate crime has taken place. I think that it is crucial for students to know how to respond to such issues and have spaces to discuss them. The unit would provide these things and make students more aware of their resources. Also, I believe that community participation is essential, so my office will be very open to feedback.

Often times when students take office they succumb to political pressures and stray from their initial goals. How will you ensure your plans are actualized?

Irmary: The Cultural Crisis Response Team will be actualized because I am incredibly fervent about this issue; the hate incidents and crimes that have occurred on campus have always been a concern of mine. However, I know that passion and determination are not enough. I am not one to merely speak about change— I engage in action. I have spoken to my advisor and Nancy Greenstein, the Director of Police Community Services at the UCLA Police Department, in order to better understand the resources needed to make the unit effective. I have also decided which Cultural Affairs Commission representatives will be involved in creating the team. Essentially, this task force is ready to act.

This year, four Afrikan-American students (including yourself) are running for USAC offices. What would you like to say about them?

Irmary: We are all incredibly passionate about student government. We understand that this is not for ourselves, but for the marginalized voices. All of my running-mates are extremely qualified and believe that being elected to USAC is a privilege. If all of us are elected, I believe that it will excite our community and encourage them to become more active. If you do not see people that look like you, you do not feel as inspired to get involved. Hopefully, that will no longer be the case next year!

Irmary Garcia is an incredible choice for USAC Cultural Affairs Commissioner and NOMMO Newsmagazine wholly supports her. Having an Afrikan-American student in such a position will certainly benefit the Black community; Irmary will ensure that our voices are heard, valued, and incorporated.