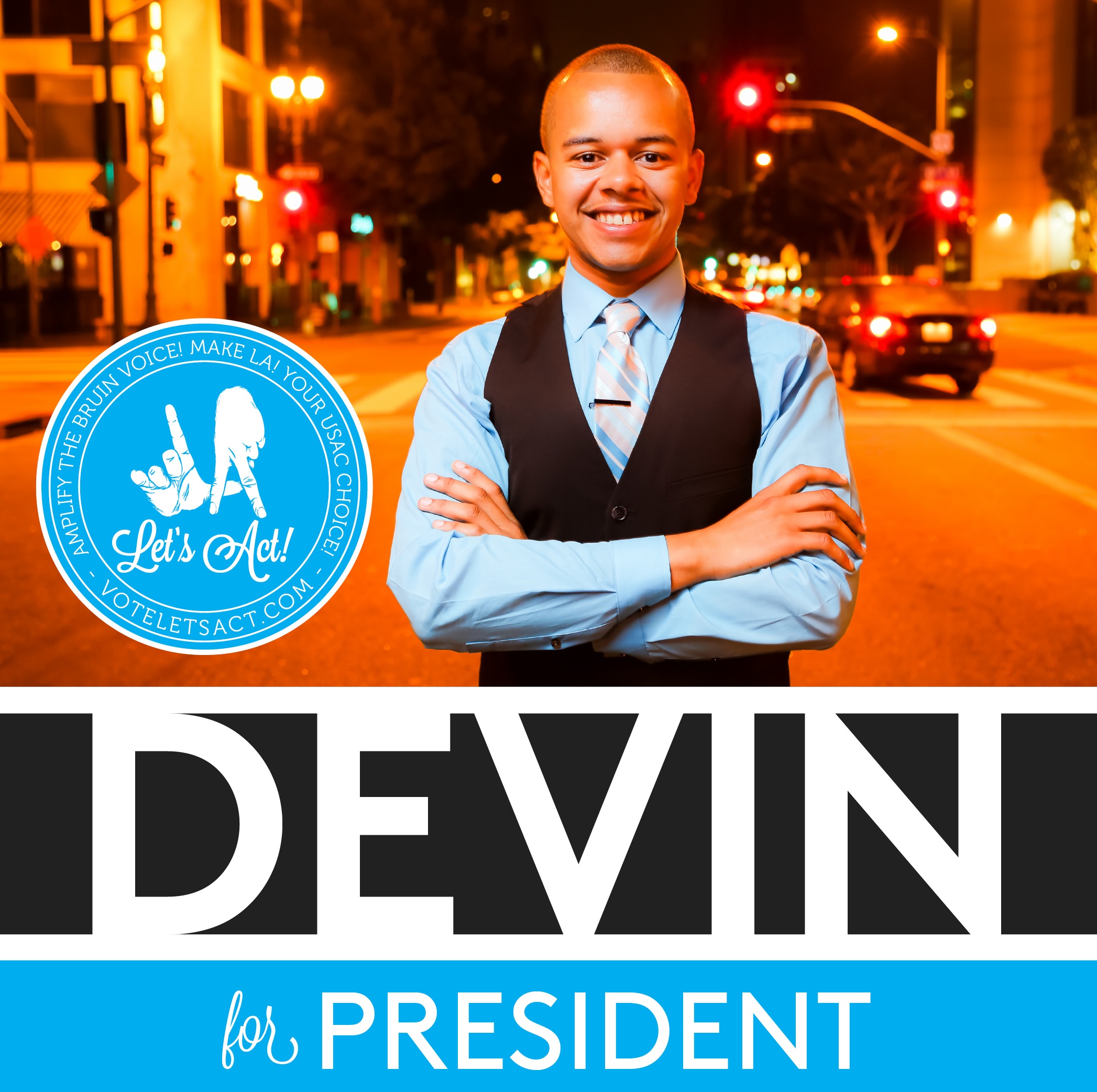 “USAC has [had] an immense history of student activism – student empowerment, and really advocating for key issues that students deal with”- Devin Murphy

Are we ready to ACT? So critical of the oppression we suffer as an Afrikan-American community, we often overlook our own homophobic self-oppressive nature.

Devin Murphy, third-year Political Science and Afro-American Studies major, is a minority in every sense, but there is nothing minor about the role that he plays in his own community and on UCLA’s campus. A Queer-identified, Afro-Cuban man, Devin carries social weights of both color and sex discrimination, only, he does so with pride. “I am extremely confident in who I am,” he pronounced from behind the USAC President’s desk.

Taking what others would call oppressive attributes and wielding them as weapons for social justice, Devin Murphy plans to hold true to himself and his identity as he makes his way to being the next openly Queer-identified Afrikan American USAC president.

Judged not by his identity, but instead by the constituents of his character, Devin Murphy has time and time again shown his ability to lead and take action.

Starting his UCLA experience as a first-year intern in the External Vice President’s office, he worked as a Student Activist Project intern, an internship he describes as, “catered towards learning about different issues in the different communities.” Here, he exuberated with passion, “learning the importance of coalition building, power mapping, and developing [himself].”

In his second year Devin served with the State and University affairs staff for the External Vice President’s office. “Now that I knew different community issues, it was time to go to work on connecting that to our direct UC system and our statewide advocacy.”  In this space of connection, he learned of the legislative process, the powers of the governor, and how to navigate different power structures, both on-and off-campus.

Now in his third year, as Chief of Staff, Devin Murphy has developed his knowledge of how to run an effective office. Attaining national coverage for platforms such as the 7,000 in Solidarity, a campaign against sexual assault, Devin has first hand experience with giving platforms significance. Humbly spoken, he professed, “No one spoke about this a year ago. We have made national coverage around our campaign that started in this room… with 3 people.

In addition to his works in USAC, Devin serves as an intern for the Vice Chancellor of Student Affairs. Though unpaid in many of his services, he appreciates the connections and changes he has been able to make while in the spaces. Additionally, experience has benefitted him with the ability of “[knowing] how to facilitate a conversation amongst various communities while finding a focal point for issues discussed.”

Well versed in knowledge of USAC, Devin Murphy understands that the presidential seat is a place of influence, “USAC is an institution on campus that has gained so much power. USAC has [had] an immense history of student activism – student empowerment, and really advocating for key issues that students deal with”. Garnished by the many spaces he has inhabited in service in the community, Devin Murphy currently stands as the favorite to win the upcoming election.

What inspired you to run for USAC president?

Devin: [Periodically homeless – coming from a place of poverty – I sat beside my mother as she attended her college night classes. I saw my mother struggle to provide for my brothers and I. Now older and understanding, I can make changes to prevent situations like my own. I’m motivated to make changes that will allow my ten year old brother to navigate through life easier than I did. Understanding who I am, I wish to not only cultivate a better tomorrow for him, but for the community alike.]

I believe in a student-centered student government and university. Through institutionalizing quarterly USAC and Student Media forums and through increasing student access to Chancellor Block, I will ensure greater transparency and accountability for USAC, as well as UCLA and UC administration.

The diversity of experiences and backgrounds that we each bring to this campus is what makes UCLA so great. Yet historically underserved and underrepresented communities still face barriers to access. I will work with UCLA and UC administration to reinvigorate our outreach and recruitment efforts because our campus should reflect the diversity of the LA community we come from.

Sleepless nights and Late Night are very familiar to many of us around midterms and finals. As students, we often put our health aside for academics. I will establish Cafe Powell to make sure that healthy eating options are available to students while studying at the college library so that we can prioritize our wellness along with our education.

Like sitting with a great professor, I felt more knowledgeable and inspired after leaving the interview – so much so, that I truly believe Devin when he states, “I have the ‘it’ factor.”

Visit www.voteletsact.com to learn more about Devin and other LET’S ACT! candidates.