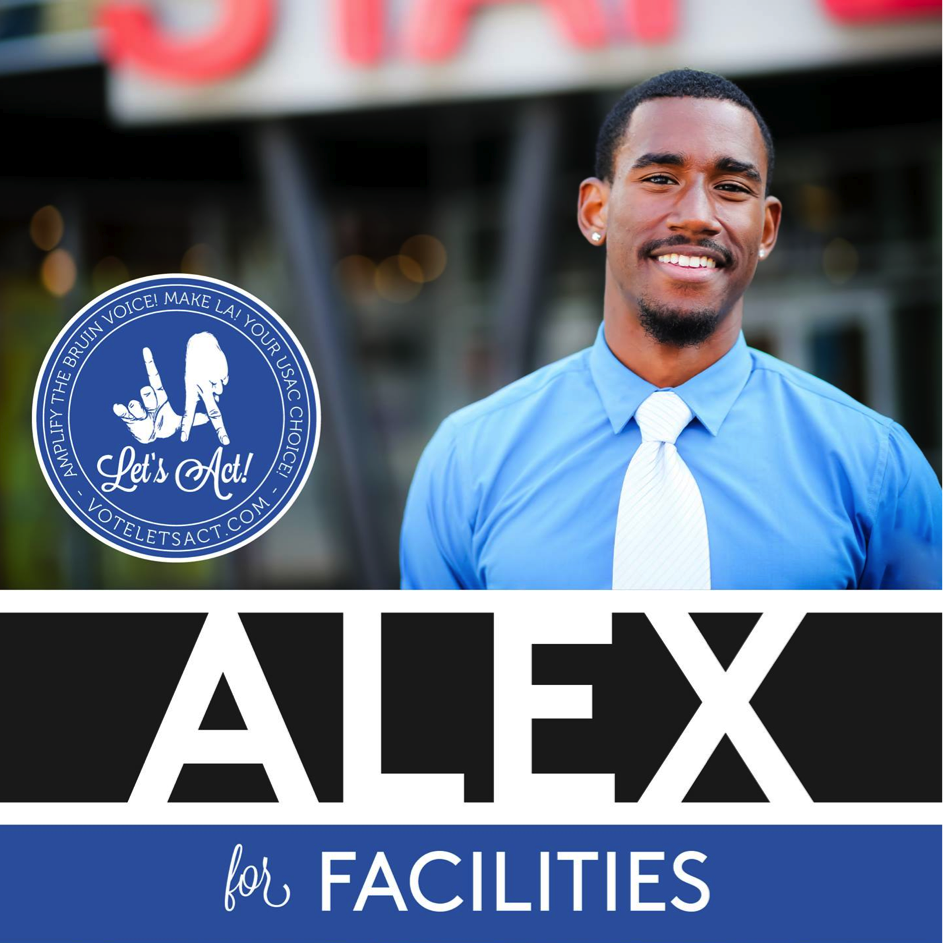 Can I get a brief introduction for our readers?

My name is Alex Mercier, and I am a third year Political Science major with an Afro-American Studies minor. I was born in Pasadena and raised in Inglewood.

What position are you running for?

I am running for Facilities Commissioner. My position deals primarily with what I call “the three S’s” which are: Sustainability, Safety, and Student Spaces. My goal is to change the way that students approach sustainability on campus through student run programs and initiatives, such as teaching students how to cultivate and grow their own crops.

What do you hope to bring to USAC?

A fresh perspective, definitely. Although naysayers try to harp on the LetsAct! team by claiming that we aren’t qualified since we don’t have enough USAC experience. But I believe that this actually benefits us because we bring in a fresh perspective from our respective communities. We all  bring that true passion and sense of commitment. We’ve all been personally nominated from our communities and put into these positions from the bottom. We’re trying to service [the community] where we’ve come from.

How long were you considering running for a position on the USAC committee?

I only considered it this past year to be honest. It hadn’t been something that I had been planning. I was actually kind of called upon to run by John Joanino (the current USAC President).

I feel like he asked me to run because he has seen the type of person I am, and my work experience in CAC as a WORD Wednesday Staff Member, the Wooden Centre Board of Governors, ASP Mentorships and my involvement in the Black Bruins Movement. He thought that I would be a good spokesperson for community, and he saw a lot of potential for me to rise in USAC.

Tell us about your involvement in the Black Bruins Movement

What are certain things you would like to focus on once you become Facilities Commissioner?

One thing I really want to focus on is getting the rooftop garden installed.  And Just continuing these conversations, because honestly the rooftop garden oversight committee is one of the biggest projects that I will be facing next year. But those will happen whether I get the position or not.

What are some challenges you think you face?

I think administration honestly. I think they can also be a great pushback because people can be very resistant toward change. I think it’s just a matter of continuing the conversation. Once I get the position I’m representing things the way that the student body wants.

If you could say one thing to the student body as a whole right now what would it be?

VOTE LETS ACT, We are the students we are the slate dedicated to working for our communities to make sure that we are seeing the change. We can talk about these positions all we want, but what’s the point if we don’t see any tangible results. And That’s what we strive for.

Voting goes from next Monday 9AM to Friday 5PM

You can go to http://usacelections.com and it get all the details.