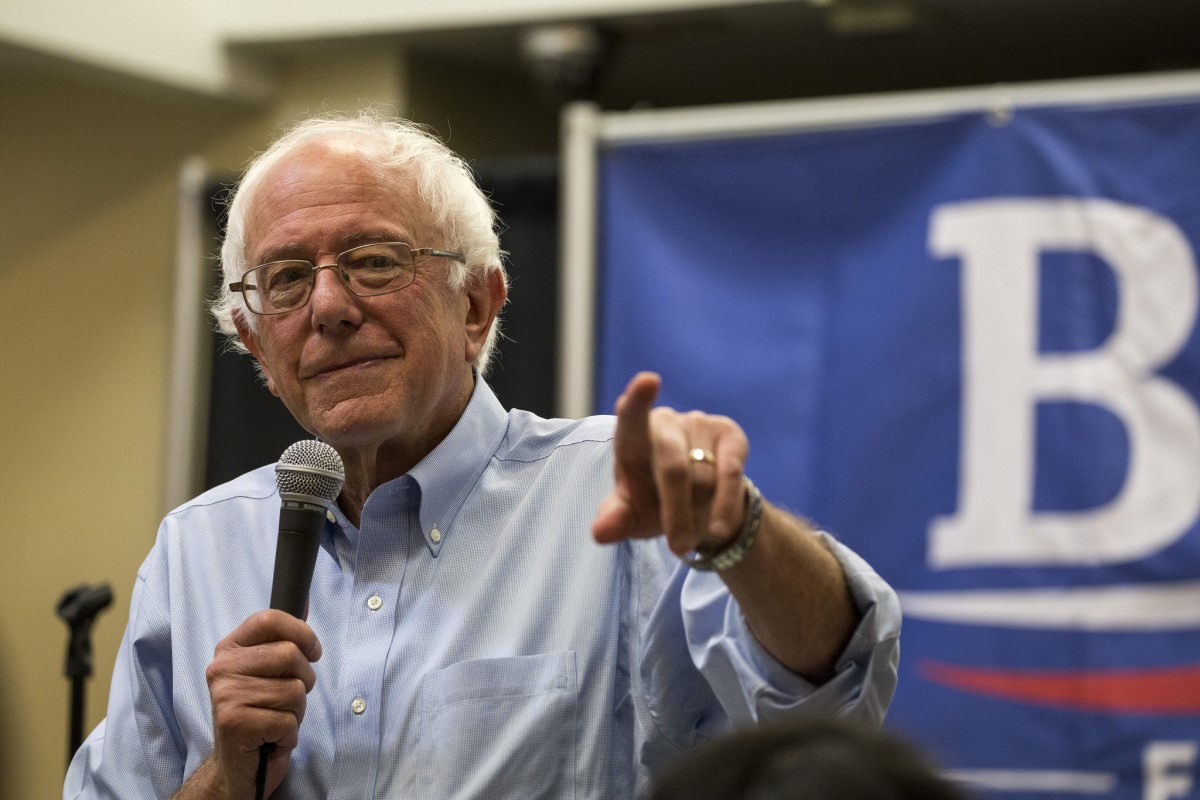 Hillary Clinton, seemingly closer to the presidency than ever, has stirred hopes of a female president to new heights. With that in mind, it’s little wonder that so much of the coverage of the Democratic primary has focused on gender, from numerous pieces characterizing Bernie Sanders’ supporters as predominantly male, or even painting them as notably sexist, to the coinage of the neologism of the “Bernie Bro.” This emphasis on the gender gap between the candidates has only grown now that the two campaigns are embroiled in a back-and-forth over whether or not some of Sanders’ criticism of Clinton has been sexist. Despite that, the actual gender make-up of each candidates’ supporters is fairly similar: 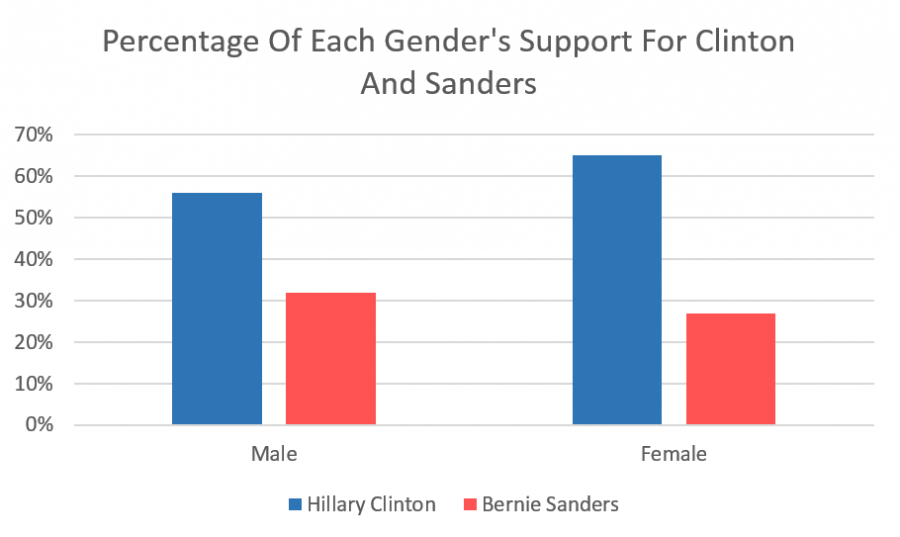 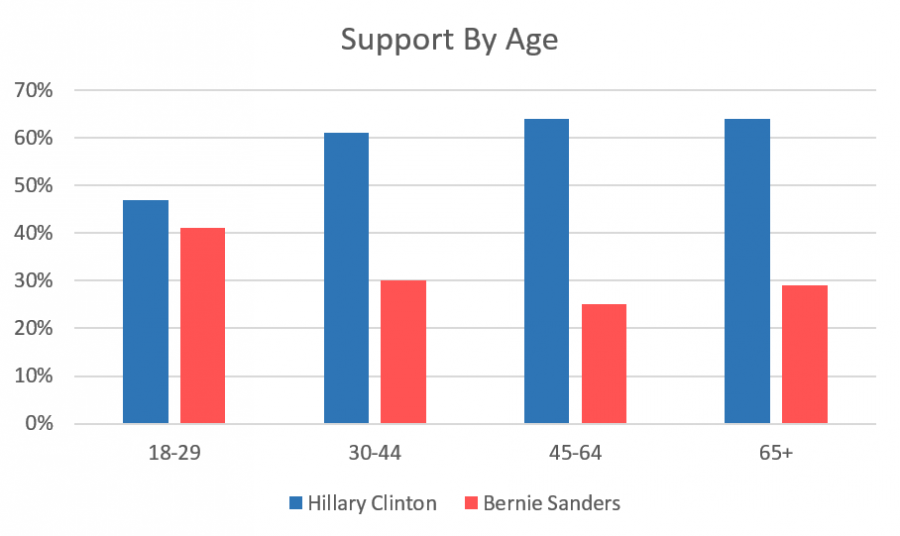 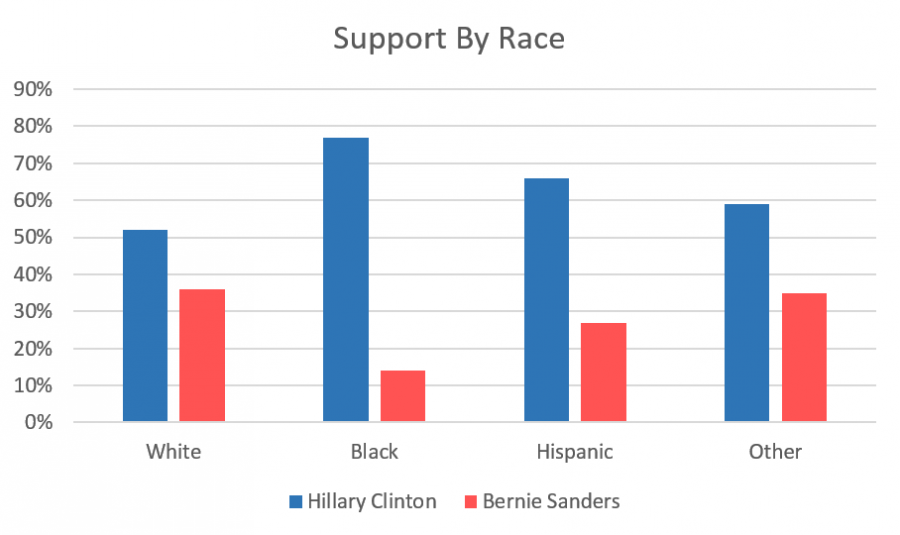 That last chart reveals the greatest difference between Clinton and Sanders supporters of all is racial—the gap between the two candidates among Black voters is larger than any other gap by age, gender, or ideology. The question, of course, is why?

Answers remain elusive. One of the predominant explanations is that black voters are simply unfamiliar with Bernie, at least relative to White voters. And there certainly is some evidence behind this theory, in that 28% of  Black voters still haven’t formed an opinion of Sanders as of late October. 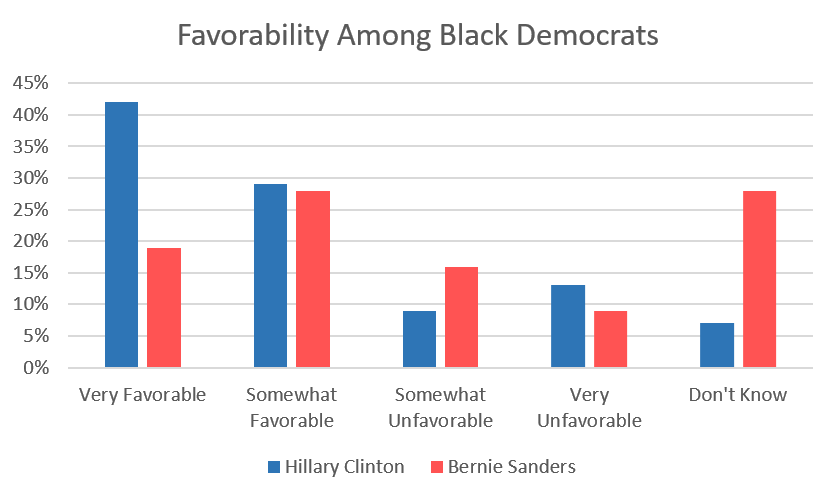 But that can’t be the only explanation; Hispanic voters are even more unfamiliar with Sanders than Black voters, with 30% saying they have no opinion of the Senator from Vermont, but nonetheless support him at almost double the rate of Black Democrats. There’s also the issue that although fewer Black voters have formed opinions of Sanders than of Clinton, 25% of Black voters have an unfavorable opinion of Bernie, while only 22% have an unfavorable opinion of Hillary. To be sure, Sanders is still rated highly favorably, but it appears his ceiling with Black voters is lower than Clinton’s is. The net favorability for each candidate (total favorable ratings – total unfavorable ratings) tells a similar story. 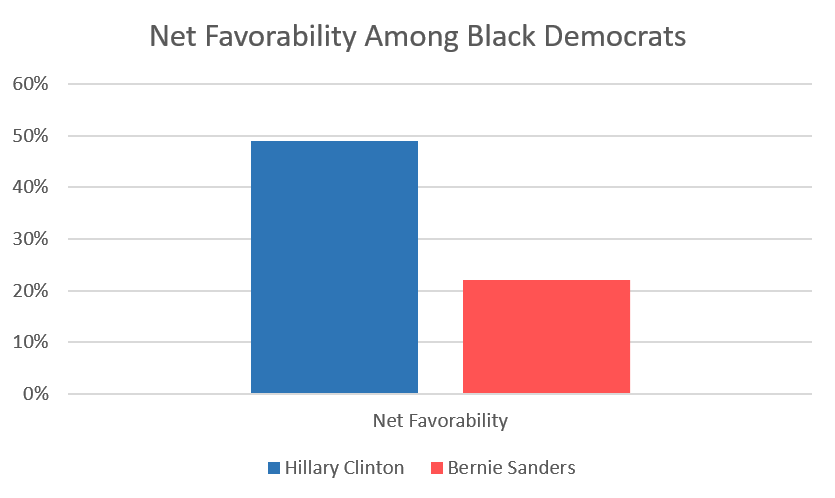 It seems clear, then, that Black Democrats simply like Hillary Clinton more than they like Sanders. Explaining that, however, remains just as difficult.

According to an analysis of Pew Research data on political ideology performed by the New York Times, Black Democrats are among the least liberal in the party—although Black voters are more liberal than Whites as a whole, this reverses itself when we look at the minority of whites who are liberal enough to identify as Democrats. Perhaps Bernie Sanders is simply too liberal for African American voters?

Except, once again, this narrative is complicated by Hispanic Democrats, who are far more supportive of Sanders despite being almost identical, ideologically, to their Black counterparts. Even more confusing is that African Americans are one of the most pro-socialist groups in the entire country, with 55% of Black folks reporting a positive perception of socialism in a 2011 Pew poll (their most recent available on the question), second only to the 59% of self-identified Liberal Democrats who approve of the S-word, which Bernie Sanders publicly embraces.

Racial justice is another non-starter explanation, as Sanders put out a detailed racial justice platform before Clinton, both supported the now-despised 1994 Crime Bill, and both have had tense encounters with Black Lives Matter activists.

The truth is that Black voters’ strong preference for Clinton resists simple, easy explanations, and appears to be wrapped up in the particularities of the candidate herself. This doesn’t bode well for Sanders, who desperately needs to make up ground with African Americans if he ever hopes to win the nomination. If he doesn’t crack the mystery soon, his candidacy is as good as finished.

Sound off in the comments below—why do you think Black voters support Hillary Clinton in such overwhelming numbers?