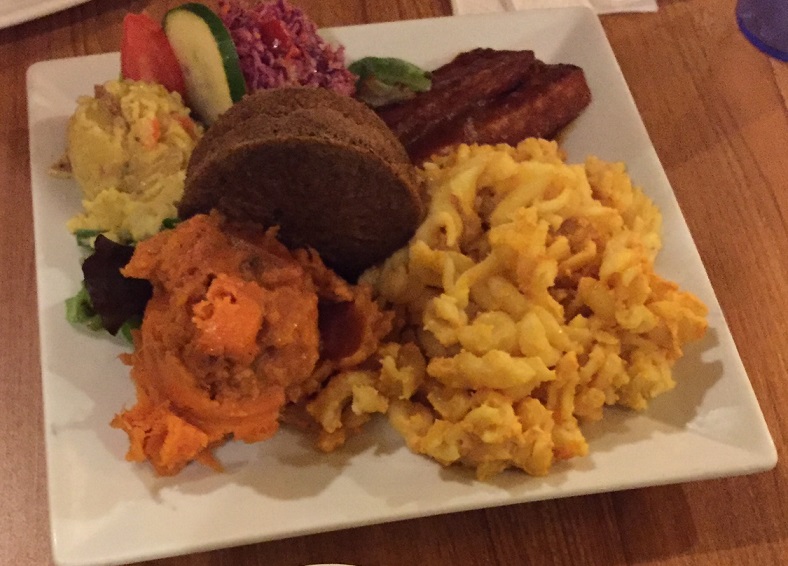 Vegan soul food.  For many of us, that phrase evokes visions of a culinary Rachel Dolezal—surely there are impostors at work. It may prompt fears of appropriation and gentrification, like when Whole Foods recently suggested putting peanuts in your collard greens, and Black Twitter had a field day. Is there no cultural culinary artifact that white hipster treasure-hunters won’t pilfer?

Luckily, you may discard all your worries and reservations. Stuff I Eat, located in Inglewood, California, is a black-owned and -operated restaurant that endeavors to combine a true soul food experience with a vegan emphasis on healthy eating. The unpretentious and friendly atmosphere that diners encounter should put skeptics at ease, and the food does not betray that trust. Though not without missteps, Stuff I Eat’s chef-owner Babette Davis has largely succeeded in her aim to marry healthful, vegan eating with soul food flavors and traditions.

The menu is so varied, however, that billing Stuff I Eat as strictly soul food would be misleading; Mexican and California cuisine are both well represented. It is very much a Los Angeles establishment, with all the cultural blending that implies. If there is a common soul food thread that runs through the dishes, it is a heartiness and comfort-food factor that might strike many as unusual for vegan fare (not to mention very generous portion sizes). You’ll leave full, to be sure. 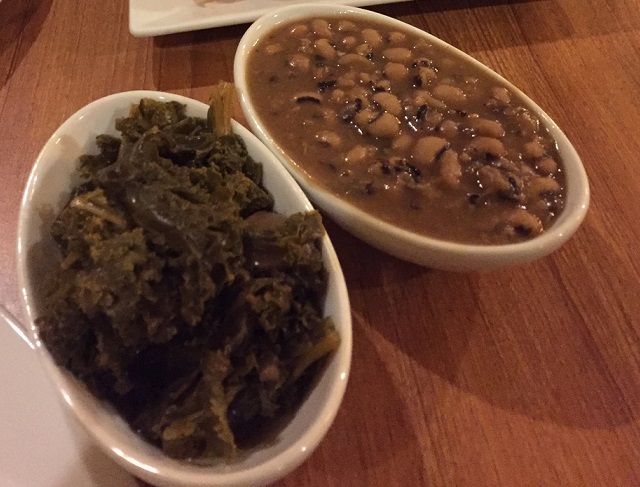 I had the vegan soul food platter, which is advertised as something of a signature dish, as well as carrot croquettes and a (cooked) spinach salad. The soul food platter’s yams, black-eyed peas, and greens (kale, not collards) were all stand-outs.The greens tasted familiar and authentic, as good as any traditionally-prepared version. The black-eyed peas were surprisingly rich and had an excellent depth of flavor that left me feeling warm and satisfied. The mashed yams were wonderfully light and fluffy, and any absence of butter went unnoticed. If there is a general theme here, it is a phenomenal preparation of vegetables, which should hardly be a surprise for a vegan restaurant.

The missteps, such as they were, came in the form of dishes that were attempting to imitate meat and cheese. That’s not to say that these dishes were bad—the tofu “ribs,” for example, had a pleasantly substantial texture and a sauce that effectively evoked barbecue, but they suffered for the comparison to the real thing. In some ways, the expectations-setting of calling these strips of fried tofu “ribs” is a bigger mistake than anything to do with the cooking. If you like tofu, this is a satisfying, flavorful preparation, but if you expect ribs, you’ll be disappointed.

The mac and cheese was the only true disappointment, with the somewhat mealy, dry texture that often accompanies vegan approximations of cheese. Still, out of a large and varied platter of soul-food inspired dishes, I could forgive the one true misfire.

The carrot croquettes and the spinach salad, however, were both outstanding. While not soul food, in a proper sense, these dishes nevertheless managed to capture the heartiness and comfort-factor that one associates with Black cooking. 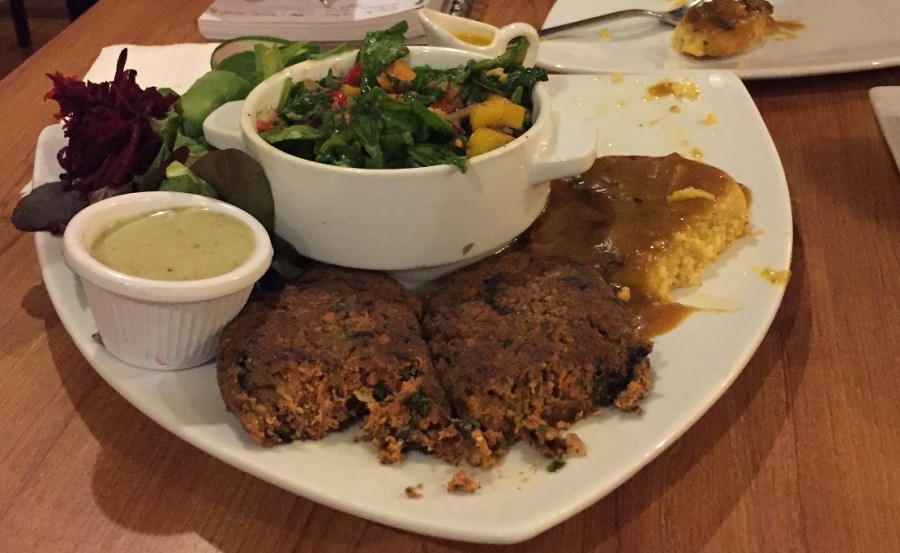 The salad was boldly flavored, with an expert balance of heat, seasoning, and bitterness, and was more filling than nearly any salad you’ll come across. The carrot croquettes were bright and light, with crispy exteriors and fluffy insides, and were accompanied by polenta cakes topped with a mushroom gravy that was suitably rich and savory. I felt warm eating these dishes—not in the sense of literal temperature, but in the sense of feeling deeply nourished.

You can certainly detect the personal effort and love that have gone into the restaurant and Ms. Davis’s food—the soul, in other words. And it’s that soul that keeps non-vegan locals coming back again and again to this Inglewood establishment. If you have the chance, be sure to check out this black-owned, family-run restaurant and experience the unique spin on soul food Babette Davis has created.