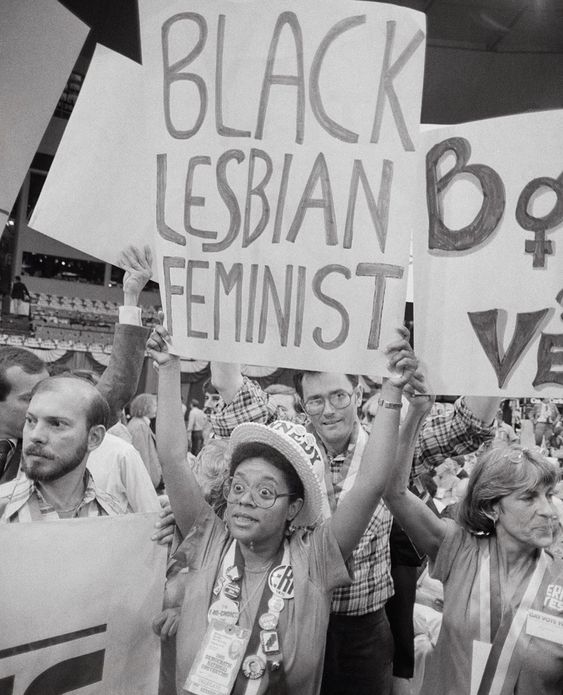 Women are traditionally and fundamentally underrepresented, underappreciated, and devalued in societal relationships. For Black women, this is amplified with Black men’s allegiance to heterosexism, misogynoir, and any claim to the privileges of the patriarchy they cling to, adding another level to the subordination of Black women. Lesbianism, and Black lesbianism specifically, has operated as a silent phenomenon within the Black community, out of fear of threatening Black nationhood and unity. The surge in women’s public allegiance to protecting, supporting and loving Black women has created a new phenomenon which serves a function of modern social identity as we move towards dismantling male supremacy.

Sapphism, otherwise known as lesbianism, refers to the romantic and sexual attraction between women. While traditionally used only in reference to romantic relationships, I will use the term “Black sapphic” and “Black sapphism” to refer to a Black woman who divests from their allegiances to patriarchy, heterosexism, misogyny, and men to create meaningful, mutual, and reciprocal relationships with women through familial, romantic and/or platonic relationships with each other. When we view our relationships with Black women as active efforts to appreciate, protect, support and love them, we actively resist the constraints placed upon women by patriarchal societal structures and male-serving institutions.

The Black community traditionally operates under a silent matriarchy: a network of women-bonded women and lesbian women providing support and sustaining the Black family structure from “behind the scenes.” Black women as mothers, aunties, friendly neighbors, lovers, and caregivers actively support each other by providing caregiving assistance, protection from violence caused by men, emotional labor, and social education for their community. A lot of Black youth are raised “by the village,” but rarely reflect on and appreciate the impact of Black women-bonded women. We rely on these women for emotional stability, sustenance, care and expect them to shape our perceptions of femininity and womanhood. The absence of a mother figure is controversial in our community, but their presence is rarely celebrated and even overlooked as standard. As the Black family structure changes and divests from the nuclear, heteronormative family, Black sapphism challenges the dependency on patriarchy as the basis of familial relationships. When the opioid/heroin epidemic ravaged through Black, low-income communities, Black grandmothers became the most likely demographic to raise their grandchildren, despite the lack of resources available to them from government entities. In instances like this, we turn to our village. We ask for support, love, and caregiving assistance from the women around us. Unfortunately, regardless of the monumental impact Black women have on our communities, our allegiance to upholding patriarchal values alters the experiences of Black womanhood. Often out of fear, isolation, and instability, we view women-bonded relationships and lesbianism as a threat to Black nationhood (which rests on upholding the institution of patriarchy and heterosexism), as mentioned in Audre Lorde’s “Sister Outsider.” As modern Black women reshape our ideas of liberation, family, and choice, we adopt the ethic and efforts of women-bonded women before us and take further steps to cherish their work.

The platonic social network of Black women is an oasis for Black sapphism. Aside from romantically, communities of Black women rely on each other to discuss the nuanced experiences of their identity that only other Black women can relate to. Additionally, these experiences overlap as these cohorts serve as support groups for family struggles, career difficulties or accomplishments, relationship advice and social relief. Nonetheless, being in the physical presence of women can birthe a sense of belonging, comfort, and familiarity that allows women to prosper with each other. The love we elicit from platonic relationships can be as influential and cathartic as familial or romantic love, especially if the romantic and familial relationships are a point of concern or unease in a person’s life. Black sapphism allows for mutual, meaningful, and reciprocal allegiances to women to occur even non-romantically. Audre Lorde’s Sister Outsider describes this active effort to decenter men as a reorganization of social relationships, which traditionally places men above women. Lorde states, “Women identified women who are no longer dependent upon men for their self-definition may well reorder our whole concept of social relationships.” When women divest from their own subjugation through the commitment to placing themselves and other women above the interests of men, they divest from heteronormative and male-serving social scripts. In her essay Lesbianism as Resistance, Black lesbian feminist author Cheryl Clarke states, “If radical lesbian-feminism purports an anti-racist, anti-classist, anti-woman hating vision of bonding as mutual, reciprocal, as infinetely negotiable, as freedom from antiquated gender prescriptions, then all people struggling to transform the character of relationships in this culture have something to learn from lesbians.”

Romantic relationships between women, and especially Black women, get little to no screen time in modern media. However, the romantic aspect of women bonded relationships adds an additional dimension to the commitment to decenter men and divest from the patriarchy. Clarke states, “The Black woman, having neither maleness or whiteness, has always had her heterosexuality, which white men and black men have manipulated by force and at will,” emphasizing the act of resistance that is being a Black lesbian (sexually and romantically). The commitment to loving women is not out of spite for men, but for the improvement of women’s lives in all aspects. Lesbianism allows for compassion to understand the nuances of femininity in addition to actively resisting misogynist, capitalist, and male-supremacist social constructions. Clarke describes this as a “potential for mutuality” in her relationship, as the lesbian has decolonized her body and rejected servitude to men. For Black women, romantic relationships with each other allows for gender and cultural mutuality. A lover who understands and resonates with the extent of your oppression, oppression that is triple-bound to sexuality, gender, and race, is a lover who can care for and empathize with these struggles as she faces them herself. The subtleties of the Black experience, like hair care, colloquialisms, cultural recipes, political opinions, fashion and music are shared phenomena for Black lesbians: rather than existing as teachable moments, these subtleties exist as commonplace. With partners of any cultural background, lesbian relationships encapsulate platonic, maternal, romantic and sexual energy that contributes to the liberation of women from male-centered structures and institutions.

Black sapphism is an occurrence of the modern Black identity. Black women around the globe continue to struggle for their freedom and turn to each other for solace, collaboration, and love. As we combat sexual slavery, child labor, lynchings of Black transwomen, violence against women, misogyny, male-supremacy, capitalism, and imperialism, the works and writings of Black women guide the rest of the world to a clearer vision of liberation. When we work together, celebrate together, fight together, and love together, dreams of progress move towards visions of reality.