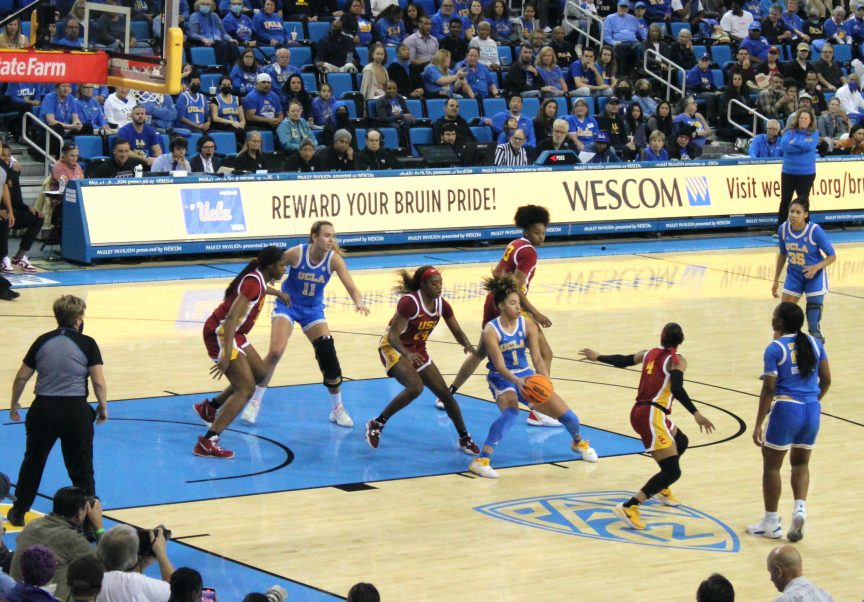 On January 8th, 2023 the Bruins beat the Trojans for the second time this season during a women’s basketball game. With a really close score, (61-60) there were lots of twists and turns, especially during the last 4 minutes of the game.

Notably, at the end of the first quarter, freshman Londynn Jones (#3) acquired the ball and was fouled by the opposition during the last second, leading to three free throws. The new lead took back the game for the Bruins as the 16-17 score turned to 19-17 with 0.02 seconds on the clock.

During the last 5 minutes of the game, the energy in the crowd and on the court was intense.

Londynn Jones brought in points with 2 free throws and a layup. Lina Sontag (#21) brought the score up by two points with her free throws as well. There were many intense moments during these last few minutes with chances for three pointers and other field goals made by Gabriela Jaquez (#23), Kiki Rice (#1), and Charisma Osborne (#20).

During the press conference after the game, Coach Cori Close expressed that “when you have …a neutral team… they’re not getting up on the highs and lows, they’re saying ‘Hey, what’s my next right step.’ We call that neutral thinking, then we get ready for big moments when we need it.”

Before the game I asked Gina Conti (#10) and Camryn Brown (#35) about preparation for such an emotionally backed challenge, to which Brown responded saying that they prepare by “focusing on the details every day, not putting too much emotion into it, but also you have it in the back of your head that this is the big… rivalry game…the fun stuff.”

Coach Close then remarked, “Whether you’re too high or too low, there’s danger on both sides of those,” adding onto the importance of focusing on the mental part of the game as well as the physical.

Once again, the Bruins take the victory, declaring that we run LA.