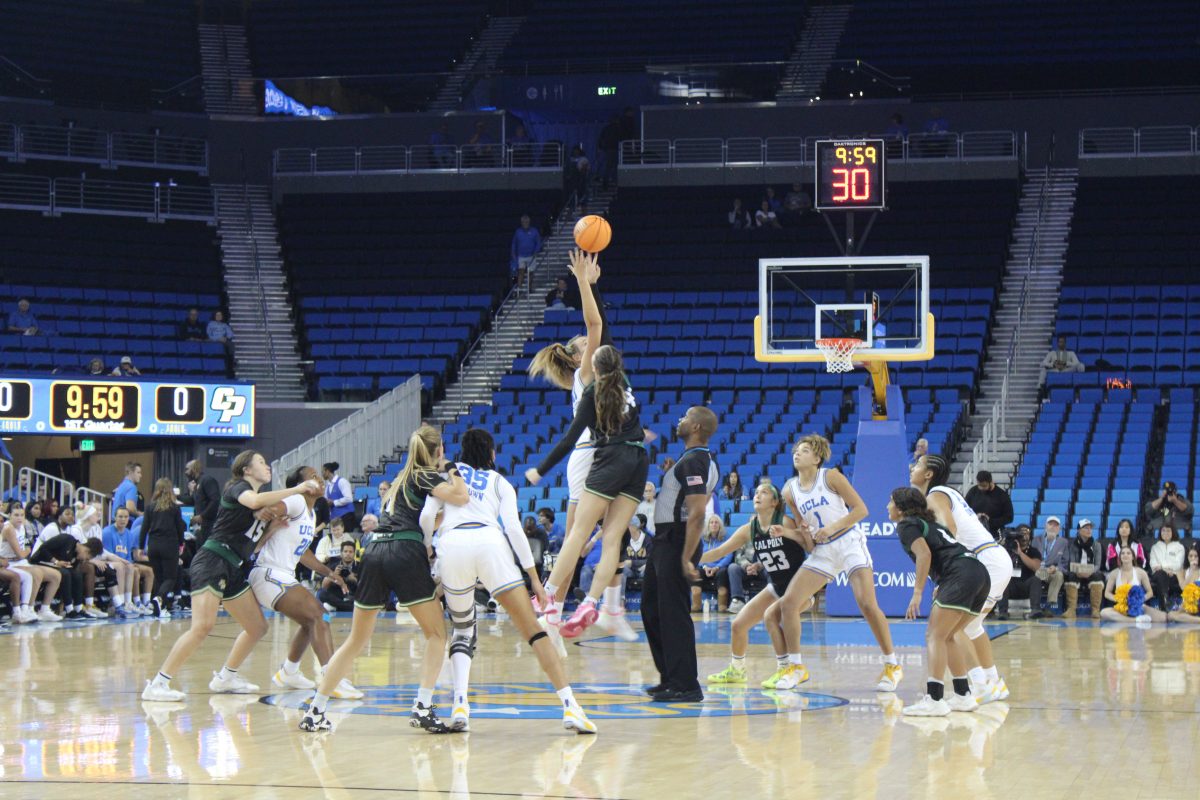 Disparity between men’s and women’s sports teams has been pertinent within the sports news cycle, sponsorships and even audience attendance for decades. Unfortunately, we see that this pattern is also persistent on college campuses across the USA.

Even at UCLA, where an inclusive culture is celebrated and respected, the disparity between men’s and women’s sports is unfortunately still present. With UCLA having lines of people waiting for a wristband to get into men’s basketball games extending from Pauley Pavilion all the way to the Covel stairs, it is interesting to think about why students don’t exude the same energy for the women’s basketball team and what systems may be in place holding this disparity.

During an interview in October with Camryn Brown (#35) and Dominique Onu (#2[at the time of the interview]), we discussed their experiences as student-athletes and women in sports generally and within the context of UCLA.

“One of the biggest [examples of disparity] we got to see was [during the 2020-2021 season] when we went to the NCAA tournament” Brown shares. “The amenities and the attention and availability for stuff that all the men’s teams got” were a lot more elaborate and plentiful. For example, in the women’s weight rooms, Camryn continues, “there were claims of ‘no space’ until Sedona Prince from the University of Oregon shared the situation on TikTok, which is when [the NCAA] shipped some more equipment in.” By utilizing media, such as TikTok in this case, evidence of the disparity and disregard of women’s sports was exposed to the world which pressured the NCAA to take action.

The lack of equal support by companies to men’s and women’s teams affects support by the public, although it seems the NCAA is improving now, step by step. This season (2022-2023) is the first season where the Women’s Tournament will have the same March Madness branding that the men have had for years. This is exciting because it could potentially increase attention towards the women’s games during the tournament, which will bring more viewers and support to women in sports.

The November 7th games were part of a doubleheader; the women’s team played against Cal Poly at 5:30pm PST and the men’s team played against Sacramento State at 8:30pm PST.  During the Postgame Media Availability after the UCLA v Cal Poly game on November 7th, Coach Cori Close spoke on the importance of media coverage of women’s sports, as it is part of the journey to lessening the apparent and pertinent disparity in attention, funding, and support of women’s basketball. Coach Close remarked during her opening statement “I am keenly aware for us to continue to grow our game… we need you to be here to cover our game and tell our stories… so thank you.”

After her debut as a Bruin on the court, Gabriela Jaquez (#23) shared that the doubleheader meant a lot to her and her family, given that her brother (Jaime Jaquez Jr. [#24]) played in the 2nd half of the doubleheader. She also shared about the importance of the doubleheader in regard to the women’s game with, “to have a doubleheader [and] to bring more fans in to watch us is a really good opportunity for the women’s basketball team.” During the game, two of the debuting freshmen, Kiki Rice (#1) and Gabriela Jaquez (#23) really let their talent shine on the court. Gabriela Jaquez’s determination and focus by the net was very impressive to watch and Kiki Rice’s speed and agility around the opposing team led to many great plays. These skills helped bring the Bruins to their first win of the season, and will continue to in the games to come.

During our interview, Dominique Onu and Camryn Brown brought a call to action for students to attend more women’s basketball games in order to help in the movement to bridge the gap between the disparity. “You can literally come to a game for free. We even raffle off things like iPads as an incentive for students to come to our games, so it would be great to see more support” Onu said. Currently, the women’s basketball team is ranked as #9 in the country by the newest AP poll due to the fervent talent by our players. It is free for students to attend UCLA’s WBB games, so come out to support our Bruins!

The members of the UCLA men’s basketball team have been supportive of the women’s game; Onu and Brown remarked they are grateful for this support as it builds community and the Bruin bond.

I would like to give a special thanks to Dominique Onu and Camryn Brown for our wonderful interview as well as Kiki Rice, Gabriela Jaquez, and Coach Cori Close for their time during postgame media availability.