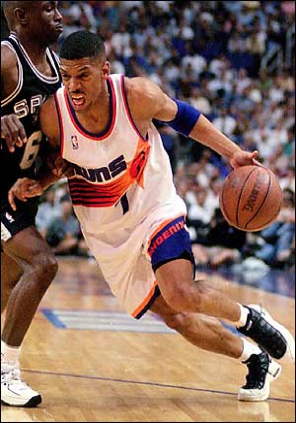 An average career in the National Basketball Association (NBA) for most players is within 6 years.

Many professional basketball players that do not pan out in the NBA find careers in business, politics or film and television. In the case of former NBA player Kevin Johnson, he went from playing on the hardwood to becoming the current mayor of Sacramento, California.

Kevin Johnson was born March 4, 1966 in Sacramento, California and played basketball in his hometown for Sacramento High School. During his high school career he led the state of California in scoring with 32.5 points per game and earned a scholarship to play basketball at the University of California, Berkeley.

Johnson led the Cal Bears to two postseason appearances, became the first Pac-10 player to post a triple-double, and the first member of the Cal Bears basketball team to have his jersey retired by the university.

The former first round, 7th overall pick was drafted by the Cleveland Cavaliers 1987-88 and would finish his career playing for the Phoenix Suns 1988-2000. During his NBA tenure for 13 years, Johnson racked up many highlights. Johnson was a 3-time-NBA All-Star, 5-time member of All-NBA Teams and  recipient of Most Improved Player Award.

In November 2008, Kevin Johnson was elected as the 55th mayor of the City of Sacramento and re-elected in June 2012.  He is the first Afrikan American to be elected as mayor and to the office.  Mayor Johnson’s vision for Sacramento is for it to become “a city that works for everyone.”

Outside of Mayor Johnson’s policy goals for Sacramento, he serves other roles as well to heighten his political profile. Mayor Johnson’s leadership positions include being President of the National Conference of Black Mayors, First Vice President of the U.S. Conference of Mayors, Chair of the U.S. Secretary of Education Arne Duncan’s Mayors’ Advisory Council, and Chair of the National Resilient Communities for America Campaign.

Prior to his career in the public office, Kevin was also the Chief Executive Officer of St. Hope (Helping Others Pursue Excellence), a nonprofit organization he founded in 1989 and led until January 2008. St. HOPE currently is made up of three divisions: St. HOPE Academy, St. HOPE Development Company and St. HOPE Public Schools. Lastly, St. HOPE serves as a program for public education, civil leadership, economic development and the arts.