In the words of notable author Lemony Snicket, “Tea should be as bitter as wormwod and as sharp as a two edged sword.” However, not all teas are created equal or even bitter necessarily. Tea comes in an assortment of flavors and different hues of color depending on what type of tea leaf it originates from.

According to teavana.com, all tea originates from a plant called Camellia sinensis and is produced in different varieties depending on the region it is grown in, the time of the year, and the harvesting method. Each type of tea has a distinct taste and set of health benefits that range from reducing stress to maintaining a healthy weight, according to the Huffington Post.

The most common types of tea are green, chai spiced, chamomile and earl grey. Green tea is probably the most widely known tea within the United States because it contains antioxidants which may interfere with the growths of some cancers, burn fat, and improve cholesterol levels.

Spiced chai can be used as an alternative to coffee because, it can be enjoyed without additives due to its aromatic and delicious taste. Also, three cups of chai tea on average contains the same amount of caffeine as a single cup of coffee, and so you can enjoy more for fewer calories. Similarly, Earl Grey tea also contains significant amounts of caffeine.

Interesting fact: according to livestrong.com if you drink large amounts of Earl Grey tea and then stop, you may experience caffiene withdrawal symptoms such as headaches, depression, and nasusea.

On the other hand, tea is an appealing beverage, because when consumed unsweetened, it is completely calorie-free with no natural sodium, fat, or carbohydrates. In fact, teausa.com states that as “An ancient beverage steeped in history and romance and loved by many… [tea] is the most commonly consumed beverage in the world after water.” Tea’s popularity can also be attributed to its high concentration of flavonoids, which act as antioxidants to destroy harmful free radicals within the body. 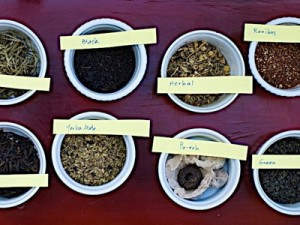 A Variety of Teas. Source: culinate.com

Seven types of teas and their health benefits as stated by Dr. Oz:

1. Passionflower Tea: Has several anti-anxiety benefits, try a cup before going to bed to calm your mind.

2. Oolong Tea: Boosts metabolism. Its concentration of both antioxidants and caffeine assists your body in burning fat faster.

3. Ginger Tea: Acts as an anti-inflammatory agent to help reduce brain inflammation; it can work like aspirin to reduce headache pains.

5. Licorice Root Tea: Has a sweet taste and is an anti-inflammatory that kills some types of bacteria.

6. Yerba Mate Tea: Full of antioxidants and vitamins that give you an energy boost.

7. Black Tea: Full of polyphenols, an antioxidant that inhibits the growth of bacteria in your mouth and minimizes bad breathe related to plaque buildup.

If you’re interested in drinking tea regularly but not into its acquired bitter taste, try different flavored variations like spearmint, spiced chai, oolong or my personal favorite cranberry-apple. Also, healthier alternatives to pure white sugar can be added to sweeten tea. The next time you decide to brew a cup perhaps try adding some raw brown sugar, agave nectar, honey, or a bit lemon for additional flavor.