Earvin Johnson Jr., better known by the name “Magic” for his magical basketball talent, is truly a magical human being. At a college level, Johnson was destined for greatness after leading Michigan State University to a NCAA National Championship, making him the easy choice for the #1 draft pick in the 1979 NBA draft.  Now a retired Hall of Fame point guard who played for the Los Angeles Lakers for 13 years, Magic won a total of five NBA titles as well as three Most Valuable Player awards during his professional basketball career. Unfortunately, in 1991 his NBA career came to an end after testing positive for HIV, shocking millions of people. 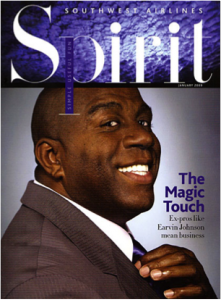 It is safe to say that Johnson has established himself as arguably the greatest player to ever play for the Lakers outside of Kobe Bryant, but Magic Johnson Enterprises has even gone as far as claiming that “Earvin “Magic” Johnson has become the most powerful Afrikan American businessman in America.  Unlike most athletes, Magic has used his accumulated wealth and reputation as an athlete and translated it into success outside of the sports realm.

Magic Johnson Enterprises, founded in 1987, is a company owned by Magic Johnson where he serves as the Chairman and Chief Executive Officer. Magic Johnson Enterprises has a net worth of $700 million. He formerly owned AMC Magic Johnson Theatres in four different cities and currently owns 13 24-Hour Fitness Magic Sport locations. He has had partial ownership in numerous restaurants including 31 Burger Kings, mulitple Magic Johnson’s T.G.I. Fridays, over 100 Starbucks locations and Sodexo, one of the largest food services and facilities management companies in the world. He has also taken part in sports related ventures, attaining partial ownership in teams such as the Los Angeles Lakers and Los Angeles Dodgers.

Magic has had his own record label, Magic Johnson Music, his own late night talk show, The Magic Hour, his own movie studio, Magic Johnson Entertainment, has worked as a motivational speaker, an NBA coach and is also a sports broadcaster. 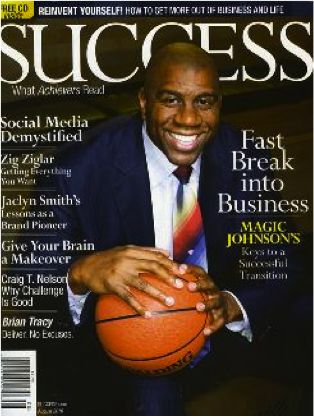 Johnson has also made an effort to improve urban areas with his Canyon-Johnson Urban Fund, which was started in 2001. The fund is an alliance with an alternative asset manager, Canyon Capital. It is the largest private equity fund focused on the revitalization of ethnically diverse communities. The fund has financed 31 real estate developments in 13 states and Washington D.C while collecting about $2 billion over the years.

As if all of that isn’t enough, Magic also has a foundation named the Magic Johnson Foundation created to help fight against HIV but has expanded its goals to help solve other issues, specific to urban communities. He created this foundation in 1991, shortly after his diagnosis. According to the Magic Johnson Foundation website, they work to develop programs and support community-based organizations that address the educational, health and social needs of ethnically diverse, urban communities. The foundation is a non-profit public charity.