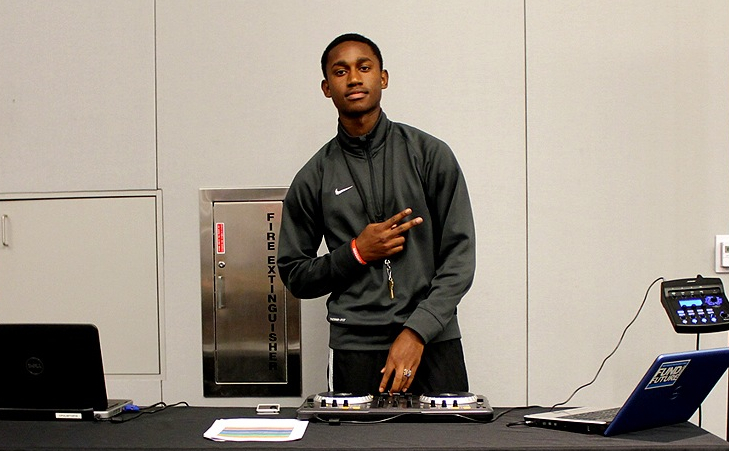 Bullets tore through the air, splitting a woman’s leg – causing pandemonium. Amongst the party, UCLA’s DJ Jukeboxx dropped behind his equipment avoiding the unnamed bullets.

In transitioning from DJing “hood parties” to turning up UCLA’s party scene, Aaron Willis (commonly known as DJ Jukeboxx) says that the fundamental element that has kept him DJing is his, “passion for the –art and craft”. Discovered at an early age, music – in all its majestic sense – has been that which moves him. “Music speaks as an emotion,” says DJ Jukeboxx. Though well aware of his interest in music in youth, DJ Jukeboxx did not get into DJing until he was 16.

With faces dull, guests at Aaron Willis’s sixteenth birthday stood lifelessly as the hired DJ [name unknown] failed to play relevant music; In the moment, not wanting his party to be a bust, a sixteen year old Aaron Willis ran to his room to make a mix of songs on a downloaded program called “Virtual DJ”. The hired DJ played Aaron’s mix, and the twerk sessions began. Since this first experience as a vicarious DJ, Aaron Willis has not only taken his art of mixing to the next level, but has continued to perfect his craft.

“DJing has kind of helped me bring in my whole business perspective – it’s like me having my own little business, and being a CEO.” Both elevating his art and coordinating business ventures, five years in, DJ Jukeboxx now plays at Westwood’s parties at a rate of a hundred-fifty dollars – reasonable when taking into account his popularity and demand. “Sometimes, I’ll be walking around and [with no one in sight] hear, ‘DJ Jukeboxx! DJ Aaron! And I’m like – why can’t I just walk around and be a normal person?” It seems true that with great power (in this case, the power of mixing), comes great responsibility. With this newfound success, Aaron Willis has found himself acclimating to both the fame and responsibilities that have come with being “UCLA’s Official DJ”. “I’ve never been the type to be a super popular person, and I don’t like being popular now. Sometimes it gets to the point where my phone keeps getting blown up, like dang, somebody always trying to party”, says DJ Jukeboxx.

Constantly working, yet unrelenting, DJ Jukeboxx continues to DJ weekly. Money aside, he recognizes the need to create a party atmosphere for the black community, especially when “[UCLA’s] white parties [and] white fraternities don’t let black males in– I hear it’s because they think we’ll take their girls or something,” says DJ Jukeboxx. Now a third year Accountant major, DJ Jukeboxx is looking to pass the reigns when he leaves. But before then, he says the next level for him is to “DJ Bruin Bash” – either way, Aaron Willis (AKA DJ Jukeboxx) is currently proclaimed, “UCLA’s Official DJ.”

DJ Jukeboxx can be found on: