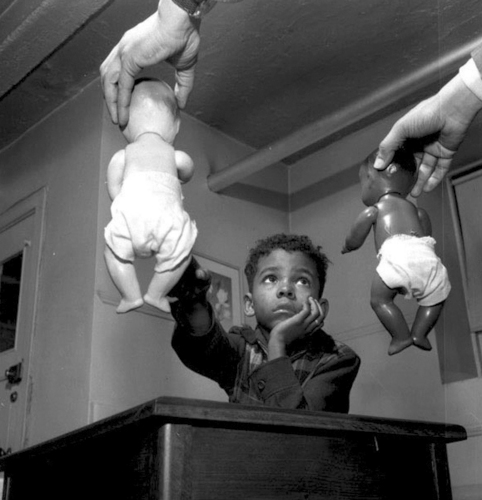 Growing up the only use I ever had for a brown paper bag was to carry my homemade lunches to school and maybe to construct a poorly made puppet for a school project. In the early 1900’s, people devised a completely different use for the paper bag. Black individuals of lighter complexions would use the brown bags to determine whether another person of color was one with whom he or she could associate. If the individual was darker than the paper bag, they were excluded. The ability of someone to pass this test had the power to dictate one’s entry into certain establishments and social groups.

I have always known about the issues between individuals of different races, but the idea of racism within a race is not as familiar. In the 1940’s there were two African-American psychologists, Kenneth and Mamie Clark, who conducted experiments with African-American children regarding race perception. They used two dolls that were identical with the exception of their skin and hair color. One doll would have white skin and the other brown skin. When the children were asked, among other things, questions about which doll was “good” or had “nicer color” they would usually choose the white doll. In 2006, a filmmaker named Kiri Davis recreated the Clark’s doll experiment and retrieved the same results. Even more recently, this type of experiment was done with Dominican children predominantly of Afrikan descent who had a range of complexions. Once again it was shown how they had a preference for the white doll when asked about positive traits and characteristics. It appears that even with the racial progressions since the 1900s that white individuals are still viewed as “better.” This may be the reason some Black people feel the need to emphasize whether they have light skin or dark skin.

In today’s time, interracial discrimination may not seem so prevalent, but perhaps this is because it is more subtle. For instance, in social media there are trends such as #teamlightskin and #teamdarkskin. There are even posts that perpetuate stereotypes of people based on their complexion, such as a light skinned guy being more sensitive than a dark skinned guy. People may be promoting their shade to simply take pride in it, however it seems that it has become a competition within the race. Who was it that determined one shade was better than another? It can project a sense of superiority and hurts the Black race by dividing it. In the past, people of other races used shades to discriminate against Afrikan Americans and I see no reason now that people of the race should do it to themselves.

It may be time to have an open dialogue about the trends we are putting forth. Statements like the ones previously mentioned simply set us back to a time when an individuals shade had bearing on a lot more than how to tag a picture.